Union Minister Dr Jitendra Singh says,PM Modi’s government is reaching out to the remotest of the remote and seeking to make up for the negligence of over six decades meted out to far flung regions by the past governments

Union Minister Dr Jitendra Singh says,PM Modi’s government is reaching out to the remotest of the remote and seeking to make up for the negligence of over six decades meted out to far flung regions by the past governments

Modi government is reaching out to the remotest of the remote and seeking to make up for the negligence of over six decades meted out to far flung regions by the past governments.

This was stated today by the Union Minister of State (Independent Charge) Science & Technology; Minister of State (Independent Charge) Earth Sciences; MoS PMO, Personnel, Public Grievances, Pensions, Atomic Energy and Space, Dr Jitendra Singh while addressing an enthusiastic public rally in the peripheral hilly location of Dudu in the higher reaches of the Udhampur district in Jammu and Kashmir. People in large numbers from neighbouring villages had gathered to hear him.

Earlier, the Minister inaugurated a mega Multi Specialty Medical Camp organised by the Indian Army through Command Hospital Udhampur. Specialist doctors from different streams including Medicines, Paediatrics, ENT, Ophthalmology, Gynaecology, Dermatology, etc. attended to the patients who turned up in large numbers from all the surrounding villages. Dr Jitendra Singh thanked Indian Army and the medical team led by Major General Dr. Dash for providing health care facilities to the people who were actually in need but sometimes found it difficult to access it.

Addressing the public rally, Dr Jitendra Singh said Dudu and other such hilly regions were endowed with amazing mountainous beauty and mountainous resources. Nature, he said, had bestowed in abundance but they faced injustice in the hands of their own elected previous governments, which did not find them of much consequence because of the vote bank consideration.

Referring to district Udhampur, he said the development of the last eight years under Prime Minister Narendra Modi far surpasses the development of the past several decades. For the last three years, he pointed out, Udhampur has been figuring as the top district of the country in implementation of centrally funded PMGSY road projects. Similarly, several important new national highways are under construction in the region which include Sudhmahadev – Marmat-Goha-Khelani National Highway and Lakhanpur-Bani-Bhaderwah-Doda Highway. He informed that the critical Chattergala Tunnel enroute the second highway got delayed because of the heavy budget of over Rs.4,000 crore, but will now be taken under Bharatmala scheme.

Referring to nearby Mantlai, Dr Jitendra Singh said, a state of the art wellness centre with even a helipad for the outside visitors will be ready very soon, through central funding. He said that the previous government did not care for the project and it was in shambles. It is only now, after PM Modi took over that the issue was brought to the notice of the Central Govt and the project was undertaken, he said. 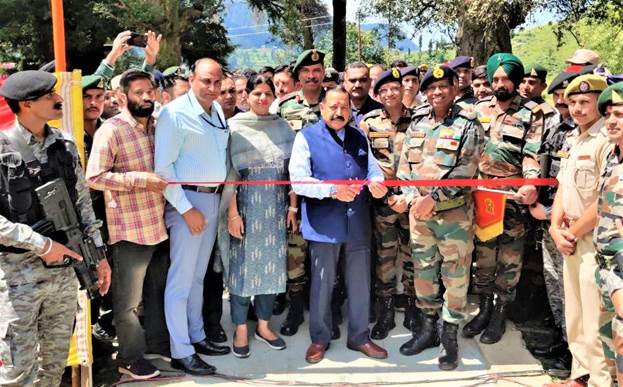 Udhampur, said Dr Jitendra Singh, is perhaps the only Lok Sabha constituency in the country which received three centrally funded Medical Colleges in recent years. In addition, there was a chain of important projects and Kedriaya Vidyalaya set up in and around this hilly region.

A large number of local body reps including BDC, DDCs Sarpanches and Panches met Dr Jitendra Singh after the rally. The Minister assured them that he and his office is always in touch with them and they were free to approach him whenever required. He also issued on the spot instructions to the civil administration to resolve some of the issues related to forest clearance etc. which were delaying central road projects etc.

A Proclamation on Child Health Day, 2022

A Proclamation on National Youth Substance Use Prevention Month, 2022