Natural farming has to be increased to take our land and country forward: Shri Tomar

Union Agriculture Minister, Shri Narendra Singh Tomar today inaugurated the National Conference on Agriculture for Rabi Campaign 2022-23 today at NASC, Pusa, New Delhi.  Addressing the Conference, he highlighted that as per 4th Advance Estimates (2021-22), production of food grains in the country is estimated at 3157 lakh tonnes which is higher by 50 lakh tonnes than the production of food grain during 2020-21. Total pulses and oilseeds production during 2021-22 is estimated at record 277 and 377 lakh tonnes respectively.

Shri Tomar said that the Central and State Governments are jointly discharging their responsibilities in the agriculture sector. A lot of work has been done in the country in terms of production, due to which there has been an increase in the production of food grains, pulses and oilseeds. Today, the priority is to tackle and solve the challenges before agriculture. 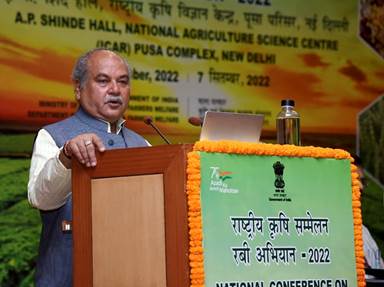 In this regard, he mentioned the Pradhan Mantri Fasal Bima Yojana, under which Rs 1.22 lakh crore has been given to farmers as compensation for the loss of their crops. Shri Tomar said that all the farmers should be brought under the ambit of this scheme. This will especially make small farmers feel secure. He said that the productivity of the soil is decreasing due to the use of chemical fertilizers, hence organic and natural farming is being promoted. Prime Minister Shri Modi’s emphasis is also on natural farming. Under the leadership of the Prime Minister, the central government is taking forward the agriculture sector. It is also being expanded through Krishi Vigyan Kendras. State governments also need to make more efforts in this direction.

The Minister expressed satisfaction on the success of Mustard Mission during first two years of its implementation.  Mustard production has jumped by 29% from 91.24 to 117.46 lakh tonnes in last two years.  The productivity saw 10% jump from 1331 to 1458 kg/ha. The area under rapeseed & mustard has increased by 17% from 68.56 in 2019-20 to 80.58 lakh ha in 2021-22. He appreciated the farming community and the State Governments for this commendable achievement. The increased mustard production will help in bridging the gap of imports of palm and sunflower oil. Government is now implementing Special Soybean and Sunflower Missions on the pattern of Mustard Mission.

Shri Tomar said that the Central Government has started work on Digital Agriculture to bridge the gap between the farmers and the Government so that the farmers get the benefits of the government schemes transparently. There is also a need to work together on the digital agriculture mission. He also said that with the efforts of the Prime Minister, the year 2023 will be celebrated as the International Year of Millets. India is going to lead this programme all over the world. The effort of the government is to increase the production and export of millets and increase the income of the farmers. He urged them to work towards promoting the nutritious cereals in the states. On this occasion, the Agriculture Minister released two books. 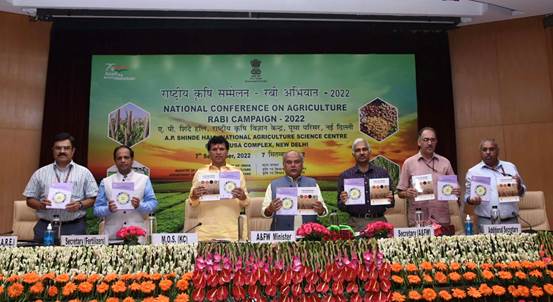 The National targets for total food grain production has been set at 3280 lakh tonnes for the year 2022-23 in which rabi season will contribute 1648 lakh tonnes. The strategies would be to enhance area through inter-cropping, crop diversification, and productivity enhancement by introducing High Yield Varieties (HYVs), adoption of suitable agronomic practices in low yielding regions, utilizing residual moisture, early sowing and lifesaving irrigation for rabi crops.

The objective of this Conference is to review and assess the crop performance during the preceding crop seasons and fix crop-wise targets for rabi season in consultation with State Governments, ensure supply of critical inputs and facilitate adoption of innovative technologies with a view to enhance production and productivity of the crops.  The priority of Government is agro-ecological based crop planning for diversion of land from excess commodities like rice and wheat to deficit commodities like oilseeds and pulses and high value export earning crops. During the 1st National Conference of Chief Secretaries held at Dharamshala in June, 2022, the Prime Minister set the agenda for crop diversification and self-sufficiency in pulses and oilseeds in consultation with States. Addressing the Conference, Shri Kailash Chaudhary, Minister of State for Agriculture and Farmers Welfare informed that the Government has taken various initiatives which include e-NAM, FPO and digital agriculture to provide its benefits to the farmers. For promotion of natural farming systems and to protect farmers’ interest in new system of cultivation, Krishi Vigyan Kendra (KVKs) and other Research & Development institutions will be the knowledge centres to provide technical know-how.

Shri Manoj Ahuja, Secretary Department of Agriculture and Farmers Welfare informed that the country is maintaining an increasing trend in food grains production since 2015-16. The total food grains production has increased by 25% in last seven years from 251.54 to 315.72 million tonnes.  Oilseeds and pulses have followed the same trend. The exports of agricultural products (including marine and plantation products) for the year 2021-22 have crossed USD 50 billion, highest ever achieved for agriculture exports.

Shri Abhilaksh Lekhi, Additional Secretary, DAFW said that there is a need to analysis the strategies of the digital agriculture for current rabi season.

Smt. Chhavi Jha, JS (Drought Management) presented details of measures as per Drought Manual that States need to adopt in case of a drought situation.  States should come forward to help the farmers in distress and adopt contingency planning for crop production.

Smt. Shubha Thakur, JS (Crops & Oilseeds) presented the vision for next five years to make the country self-sufficient in pulses and oilseeds commodities. It is proposed to increase area expansion by 14% and productivity enhancement by 23% to achieve the target of 325 lakh tonnes for pulses by 2025.

Shri Pramod Kumar Meherda, JS (Information Technology) presented a mission mode project will be implemented to bring the benefit of digital technology and hi-tech solutions to all farming community especially to small and marginal farmers in collaboration with the State Governments.

This was followed by an interactive session with Agriculture Production Commissioners and Principal Secretaries of all the States for increasing area coverage, production and productivity during rabi season.