Dr Rajendra Badwe, Director, Tata Memorial Centre, Mumbai today presented the results of a landmark multi-centre Indian study on breast cancer. The results of this study show that this simple, low-cost intervention significantly and substantially increases the cure rates and survival of breast cancer patients, with a benefit that is ongoing for several years after surgery. The injection requires no additional expertise, is inexpensive, and can result in saving up to 100,000 lives annually globally. These benefits are substantial and were achieved with an intervention the cost of which was less than Rs.100/- per patient. For comparison, benefits of far lesser magnitude have been achieved in early breast cancer patients by much more expensive, targeted drugs which cost more than ten lakhs per patient. The clinical trial is hence an important milestone in the treatment of breast cancer. The trial in women undergoing breast cancer surgery involved the injection of a commonly used drug around the tumour, on the operating table, just prior to surgery. Dr. Badwe presented these findings at the ongoing European Society of Medical Oncology (ESMO) Congress in Paris, one of the most prestigious cancer conferences in the world held annually in Europe. A press conference to announce the results of the trial was arranged today, simultaneously with the live streaming of the presentation, followed by the address by Dr. Sudeep Gupta, Professor of Medical Oncology, Tata Memorial Centre/Hospital & Homi Bhabha National Institute and Director, ACTREC. Joining from Paris immediately after his presentation, Dr Badwe commented, “This is the first study of its kind globally, that has shown a sizable benefit by single intervention prior to surgery. If implemented across the world, it has the capability to save over 100,000 lives annually. For scientists, it opens the window of peri-operative intervention to modulate the environment of cancer in such a way as to prevent its deleterious reaction to the act of surgery [observation]. Evolving low-cost interventions for cancer has been a mission of Tata Memorial Centre and Department of Atomic Energy for the benefit of Indian and global population and this study, supported by the Department of Atomic Energy, is a major step towards Atma nirbhar Bharat.” Dr Sudeep Gupta, Professor of Medical Oncology at TMC and Director ACTREC, one of the co-investigators of the study said, “This study provides an inexpensive and immediately implementable treatment in breast cancer which can be practiced by every surgeon who treats this disease. The results from a large randomized trial, which is the gold-standard way of evaluating the worth of new treatments, provides the highest level of evidence to support the use of this technique. This study is proof that Indian centres can design and conduct studies which have a global impact.” The study, ‘Effect of Peri-tumoral Infiltration of Local Anaesthetic Prior to Surgery on Survival in Early Breast Cancer’ is a randomized controlled trial, conceived and designed by Dr Badwe, who is the principal investigator. The study was conducted by investigators at 11 cancer centres in India including Tata Memorial Centre in Mumbai over an 11-year period between 2011 and 2022.

The study included 1,600 women with early breast cancer who were planned to be treated with surgery. Half of these patients, constituting the control group, received standard surgery followed by standard post-operative treatment including chemotherapy, hormone therapy and radiotherapy as per guidelines. The other half, constituting the intervention group, received an injection of a commonly used local anaesthesia agent, 0.5% lidocaine, all around the tumor, just prior to surgery. They then underwent standard surgery followed by the same postoperative treatment as was given in the control group.

Dr Badwe’s previous research has suggested that there is a window of opportunity just prior to, during, and immediately after surgical removal of the primary cancer when anti-cancer interventions could reduce the risk of development of disseminated stage 4 metastatic cancer later in the lifespan of the patient. Lignocaine, which is a commonly used, inexpensive, local anesthesia drug, was thought to be one such suitable intervention because of its inhibitory effects on cancer cell division, movement and other anti-cancer properties. Depicted here is the diagrammatic representation of the technique of peri-tumoral injection which is simple and requires no additional expertise. After completion of treatment patients were followed up regularly for several years to compare the rates of cure and survival between the control group and local anaesthesia group. When enough follow-up had happened in both groups the data was analysed at a cut-off date of September 2021. As expected, there was no toxicity of lignocaine in patients who received it. The 6-year disease-free survival (cure rate) was 81.7% in the control group and 86.1% in the local anaesthesia group for a 26% relative reduction in the risk of cancer relapse or death with the local anaesthesia injection, which was statistically significant. Similarly the 6-year overall survival was 86.2% versus 89.9% in the two groups for a 29% reduction in the risk of death with the local anaesthetic injection, which was also statistically significant. Depicted below are the disease-free survival and overall survival in the two study groups over time. 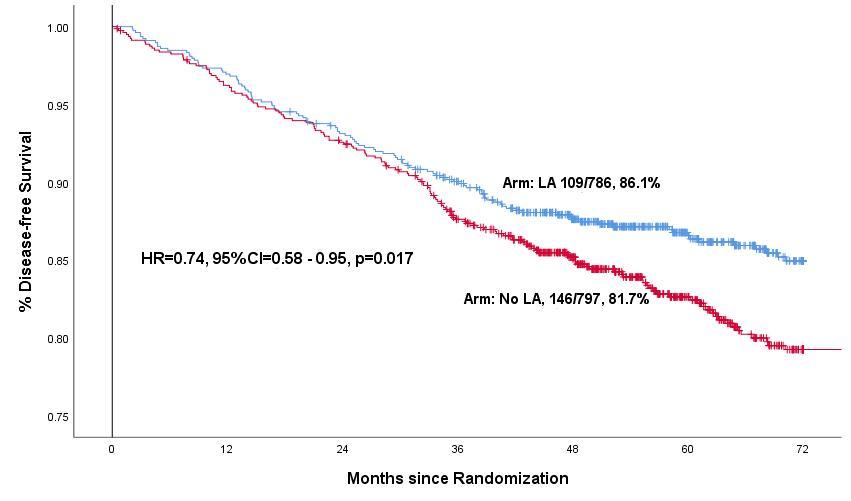