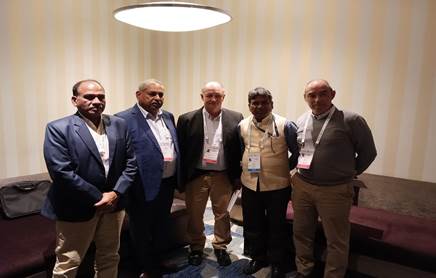 Mr. Marcos Martinez said their country grows millet species like Sorghum and Finger millets and many minor native millets like Paspalum and Panicum millets.  He said Uruguay has native grasses that grow naturally and is used for animal production.  He said this native grassland is considered as native wealth of Uruguay and is raised naturally as feed for bovine and sheep.

Mr. Marcos Martinez said they would like to explore the possibility of cooperation between two countries on germ plasm exchange, grain processing for human food and eventually also for breeding and any other research related to grain production. He said Uruguay is considered as leader in food production. Uruguay has 3.5 million people but produces food for more than 30 million people. He said they export Soyabean and its components like oil, which are mostly GM crops, long grain rice. He said they export meat, milk, oranges, lemon, wool and locally produced wine.  The production of wool and leather is enormous and there is still high potential for export.

Shri Ashwani Kumar thanked Mr. Marcos Martinez for informing the potential for export from Uruguay. He said India has also lot of agricultural products which can be exported to Uruguay. He said India produces many vegetables and fruits and exports Mango, Grapes, Pineapple, Pomegranate to many countries, including the US, Canada etc. He said India also exports vegetables and Basmati Rice to Europe and North America, which is worth Rs. 30,000 crores. He said ten types of millets are grown in the country.  He further said minor millets are also produced in very large area.  He said there can be a technical bilateral group consisting of Department of Agriculture, Department of Animal Husbandry and ICAR from India, who can meet annually and move further in the field of millets and any other crop or export.  He said Uruguay may send a letter expressing their interest for cooperation and move forward in a planned way.  He said both countries can also chalk out a roadmap for mutual exchange in germ plasm.  He said both countries can benefit from expertise in their respective countries. He said, in the field of agriculture, Joint Working Groups (JWG) are in existence between India and the US, Canada, Australia, Europe Union and like that JWG can be formed between India and Uruguay, which can meet twice a year – once in India and once in Uruguay.  He said there can also be technical cooperation between universities of both countries.  He said India has 74 agricultural universities and our country is very strong in this field.  Bilateral student exchange programme is also one of the areas where both countries can cooperate. Admission of students from Uruguay for research and post-graduate programmes can also be done here.  The Uruguayan delegation said it is a wonderful idea as it makes relationships to grow.  Shri Ashwani Kumar said both countries can work on farmers’ rights and plant variety.  India has an Authority for plant variety called PPVFRA.  Capacity building can also be done by both countries.

Shri Ashwani Kumar said a letter may be sent from Uruguayan Embassy expressing their interest for a bilateral agreement so that we can move forward.