e-auction will continue up to 2nd October, 2022

Shri Narendra Modi is the first ever Prime Minister of India, who has decided to auction all the gifts he receives for the noble cause of Namami Gange: Shri G.K Reddy

The Ministry of Culture is organizing the fourth edition of e- auction of prestigious and memorable gifts presented to Prime Minister Shri Narendra Modi which is scheduled from 17th September to 2nd October, 2022. 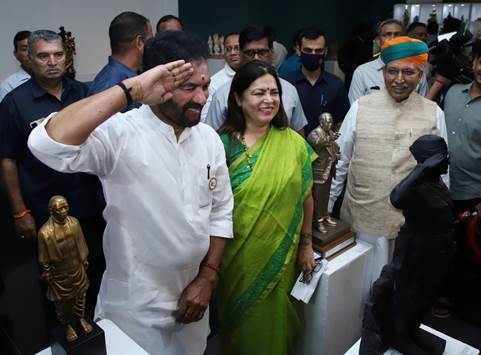 Briefing the media, Union Minister of Culture, Tourism and DoNER, Shri G. Kishan Reddy said , “ In 2019 these items were auctioned for people by open bidding. That time 1805 gifts were put on auction in the first round, and in second round 2772 gift items were put on auction. In 2021, also e-auction was organised in September and we had  1348 items on auction. This year approximately 1200 mementos and gift items have been   put on e-auction. The display of the mementos have been done at the National Gallery of Modern Art, New Delhi. These items can also be viewed on the website”.

Giving more details, the Union Minister said, “ Mementos in the auction include exquisite paintings, sculptures, handicrafts and folk artefacts. Several of these are items customarily offered as gifts, such as traditional angavastrams, shawls, headgears, ceremonial swords. Other memorabilia of interest include replicas and models of the Shri Ram Mandir at Ayodhya and the Kashi-Vishwanath Temple in Varanasi. We also have an exciting section of sports memorabilia”. Union Minister said that team India’s stellar performance at the Commonwealth Games 2022, the Deaflympics 2022 and Thomas Cup Championship 2022 earned us a place in history and a rich haul of medals. On auction are the memorabilia presented by the teams and winners of the sporting events. There are 25 new sports memorabilia in this edition of auction, the minister disclosed.

Union Minister G.K Reddy added, “Shri Narendra Modi is the first ever Prime Minister of India, who has decided to auction all the gifts he receives for a noble cause of conserving the lifeline of the country- the river Ganges through Namami Gange. I urge everyone to participate in the auction liberally and contribute towards the noble mission”.

On the occasion, Shri Arjun Ram Meghwal said, “In the last auction people from every state and origin participated in the auction actively”. The minister also urged people this year to participate in the auction of prestigious and memorable gifts presented to Prime Minister Shri Narendra Modi.

Sm. Meenakashi Lekhi highlighted the significance of various momentos presented to the Prime Minister and how the e-auction offers an exceptional occasion to the people to contribute to Namami Gange. 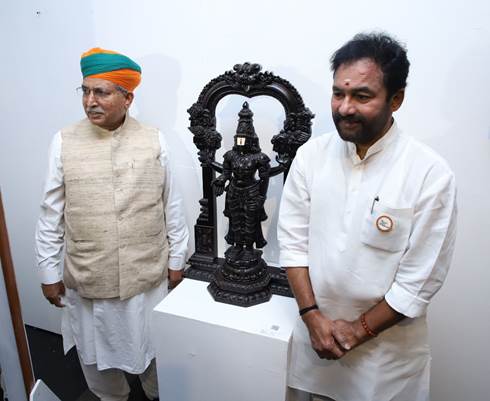 To make the visit even more enjoyable, guided tours in general and guided tours in sign language for the hearing impaired have been arranged. Catalogues in braille will also be made available for the visually challenged. The display area will be open to the public from 17th September to 2nd October and is free for all. The funds raised through the auction will contribute to a worthy cause, the Namami Gange Programme, the flagship project that seeks to conserve and rejuvenate our National River, Ganga.