India only country in the world with a four-layer health infrastructure in place. Workforce of ASHAs at the grossroots our powerful foot soldiers-Dr Mansukh Mandaviya

“Streamlined coordination between Centre and States can bring out the best output in healthcare delivery. The Centre is committed to supporting States through financial and technical resources in efficient and effective implementation of health programmes aimed towards quality healthcare”. This was stated by Union Minister for Health & Family Welfare Dr Mansukh Mandaviya as he chaired the seventhmeeting of Mission Steering Group (MSG) of National Health Mission (NHM), here today. The MSG is the apex decision-making body of NHM that takes decisions on policies and program implementation under the Mission. Shri Gajendra Singh Sekhawat, Union Minister of Jal Shakti, Dr Virendra Kumar, Union Minister of Social Justice & Empowerment, Dr. Bharati Pravin Pawar, Minister of State for Health & Family Welfare and Dr V K Paul, Member (Health), NITI Aayog were among the members who attended the meeting. Secretaries of Ministries of Government of India including MoHFW, AYUSH, DoNER and senior officers from WCD, Drinking Water and Sanitation, Panchayati Raj, Rural Development, Urban development, Department of Higher Education, Social Justice and Empowerment,Health Secretaries of State Governments and eminent public health professionals also attended the meeting. 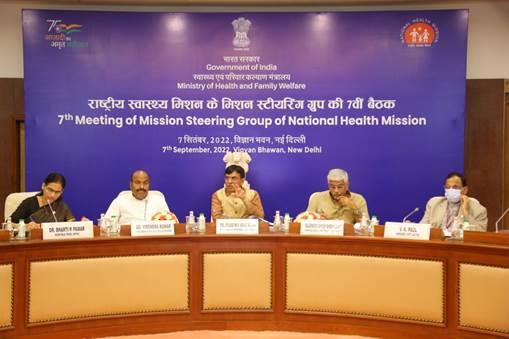 Addressing the meeting, Dr Mandaviya noted that India is the only country in the world with a four-layer health infrastructure in place with a 10-lakh strong ASHA workforce at the grassroots. “These powerful foot soldiers of our health force have played a pivotal role in India’s COVID management and COVID vaccination campaigns”. He added that strengthening incentivisation of the healthcare workers who work with communities at the cutting edge can give an impetus to various programmes. He underscored moving ahead with sharpened focus on timely elimination of diseases such Kala Azar, Leptospirosis etc., as these diseases largely impact the poorest households and communities in the country. 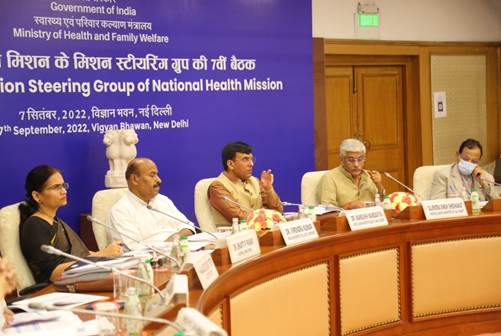 The MSG was apprised about the achievements made under NHM during the past few years:

– The Pradhan Mantri National Dialysis Program (PMNDP) has been implemented in615 Districts of 36 States/UTs at 1136 centres by deploying 7809 hemo-dialysis machines.

– Major interventions in health have led to reduction of Out-Of-Pocket-Expenditure (OOPE) from 69.4% to 48.8% as per NHA estimates.

– 31 states have achieved replacement TFR as per NFHS-5 report.

The 7th MSG of the NHM discussed various agenda points including Sickle Cell Disease among tribals. It was decided to implement sickle cell screening programme in mission mode. Emphasis was given on National TB Elimination Programme and it was decided that all necessary actions will be taken up to end TB by 2025 as per Hon’ble Prime Minister’s vision of achieving the target of TB Elimination by the year 2025. The MSG also deliberated upon costing norms for National Ambulance Services and Mobile Medical Units (MMUs). It was decided to incentivize ASHA for creation and seeding of ABHA IDs in various IT portals of MoHFW. Additionally, the MSG discussed malnutrition among children, awareness and capacity for prevention and control of snakebite and reviewed the status of Prime Minister National Dialysis Programme. The member Union Ministers appreciated progress made under NHM through focused programmes and support provided to states over the years. Several suggestions were proffered including refinement and monitoring of fund flow from state treasury to districts;ensuring inclusion of left-out population such as nomads, street dwellers, various divyang persons in PM-JAY scheme;accelerating filling vacancies of technicians and paramedics in health facilities;incentivizing mechanisms; and enhancing the synergy between Centre and states for timely matching fund allocation from the latter.

Dr. Mansukh Mandaviya noted that the decisions taken in today’s meeting of MSG will strengthen the delivery of healthcare services in all three levels of healthcare – primary, secondary and tertiary, which will provide citizens with universal access to equitable, affordable & quality health care services that are accountable and responsive to people’s needs of the country in both rural and urban areas. He further added that the feedback and suggestions from the meeting would be considered to guide the roadmap on interventions to be taken up.