CCRAS has the potential to add a fresh dimension to global healthcare research: Vaidya Kotecha

AYUSH CCRAS has the potential to add a fresh dimension to global healthcare research: Vaidya Kotecha Posted On: 15 SEP 2022 4:50PM by PIB Del

CCRAS has the potential to add a fresh dimension to global healthcare research: Vaidya Kotecha

Secretary, Ministry of AyushVaidya Rajesh Kotecha, visited the Central Council for Research in Ayurvedic Sciences (CCRAS), a scientific research council under the Ministry of Ayush, to review the functioning of the Council on Thursday. Reportedly, the Council has been doing considerable work in the field of Ayurvedic sciences and has also received ‘Best Institution for Research in the field of Ageing’ award from the President of India in 2019.

Notably, the CCRAS is an autonomous body of the Ministry of Ayush (Ayurveda, Yoga & Naturopathy, Unani, Siddha, and Homeopathy), Government of India. It is an apex body in India for the formulation, coordination, development, and promotion of research on scientific lines in Ayurveda. The Council has been considered the leading body in scientific research in the field of Ayurvedic Sciences. 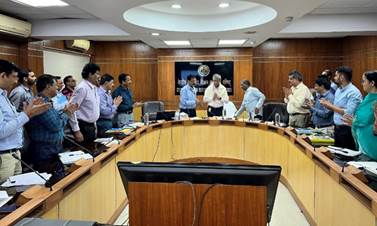 The secretary, while addressing the gathering of scientists and staff of the Council congratulated them and mentioned that “I am very happy to note that CCRAS has been successful in its efforts to take the benefits of Ayurveda to the citizens through scientific activities.”

Secretary Kotecha instructed the officials to expedite pending matters such as building projects and other infrastructure development-related activities. He further mentioned, “The Council has been doing exemplary works in its domains, however, there are many activities that may be hampered due to delays in providing manpower or infrastructure. The Council must make sincere efforts to address these issues and wherever required, may take help of the Ministry.” On the matter of accreditation of hospitals and laboratories, the Director General apprised the Secretary that three of its labs have got NABL accreditation and 14 institutes have already applied for NABH accreditation.

“The Council must make efforts to develop a mechanism to actively monitor and expedite administrative, finance and HR-related activities at all its field offices”, added Secretary Kotecha. He also recommended improving the quality of research publications of the Council. He also mentioned, “considering the current strength of technical officers, there is great scope of improving the number of indexed publications and Council should make efforts to motivate its scientists for publishing in quality high-impact journals”.

Professor Rabinarayan Acharya, Director General, CCRAS, apprised Secretary Kotecha about ongoing scientific activities and key projects. He mentioned, “under the guidance and support of the Ministry of Ayush, the Council has expedited efforts to develop meaningful and public welfare-focused collaborations with institutions of repute across the world.” “The Council has collaborated with eminent institutions of US, UK, Latvia, and Germany. We have also developed important collaborations with top Indian institutions including ICMR, ICAR, CSIR, IIT, BHU, and others” he further added.

Background Press Briefing on the Vice President’s Meetings in Japan