The Minister also launches the Campaign Logo-Vasuki, dedicated to the youth of the country as they are taking keen interest in the campaign

The Coastal Clean-Up campaign has been designed on the model of whole of government approach and many ministries and departments are taking active part in it: Dr Jitendra Singh

Senior public figures, film celebrities, students and people from all walks of life have joined the ongoing pan-India Coastal Clean-Up campaign resulting in an overwhelming response to this 75 days exercise which is to conclude on 17th of September. 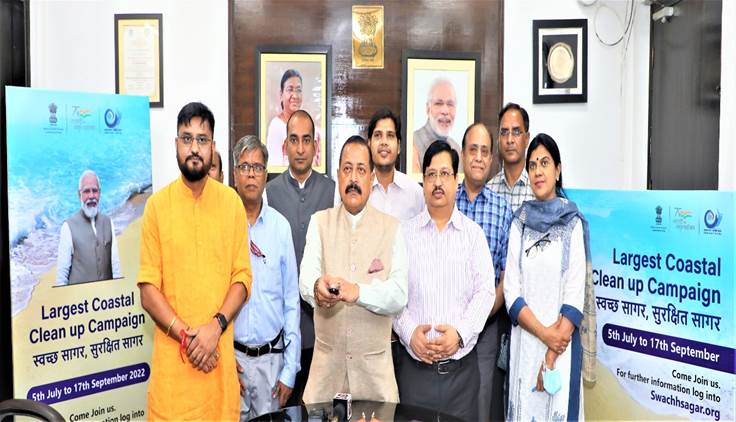 The Minister also launched the Campaign Logo-Vasuki, dedicated to the youth of the country, as they are along with the school students taking keen interest and joining the coastal and beach cleaning activities.

Briefing the media about the progress so far of this longest ever campaign of its kind, Dr Jitendra Singh pointed out that the campaign has been designed on the model of “whole of government” approach, often reiterated by Prime Minister Narendra Modi, and said that apart from the executing Ministry of Earth Sciences, Ministries of Environment, Forest and Climate Change, Jal Shakti, Health and Family Welfare, Fisheries, Animal Husbandry and Dairying, External Affairs, and Information and Broadcasting are actively participating in the campaign. He also added that many Ministers and MPs have pledged full support to the first-of-its-kind and longest running coastal clean-up campaign in the world. Dr Jitendra Singh pointed out that only yesterday, Union Minister of Environment, Forest and Climate Change Bhupender Yadav led the Beach Cleaning and Awareness Campaign along with Lieutenant Governor of Puducherry Dr.Tamilisai Soundararajan and the Chief Minister of Puducherry N. Rangaswamy. The campaign at the Promenade beach was marked by taking a Pledge on “I Am Saving My Beach” by school children and beach users in English and Tamil. This was followed by a prize distribution for the painting competition held on the occasion. The dignitaries flagged off a walkathon by 100 school students, cyclists and a float on “Connecting with the Ocean”.

The Minister also informed that more than 200 ton of garbage, mainly single use plastic, have been removed from the sea coasts during the first 20 days of the ongoing 75-day Coastal Clean-Up campaign launched on 5th July, 2022.

Dr Jitendra Singh also noted with satisfaction that so far more than 52000 volunteers from 24 States have already registered for the 75-day long campaign launched on 5th July, 2022, to raise awareness about “Swachh Sagar, Surakshit Sagar”, which will culminate on “International Coastal Clean-up Day” on 17th September 2022.

The Minister directed the officials of the Ministry of Earth Sciences to rope in NGOs, citizen groups, children and youth forums, corporates, non-profit organisations, consular staff as well as the Municipal Corporations of the Coastal States to convert it into a Jan Andolan.

Dr Jitendra Singh reiterated that Prime Minister Narendra Modi has taken a lead in the cleanliness campaign and has motivated the entire nation to keep the 7500 Kilometres long coastal line of India clean, safe and healthy for mankind.

Dr Jitendra Singh sought active cooperation of members of civil society to achieve the target to remove 1,500 tonnes of garbage, mainly single use plastic from the sea coasts on “International Coastal Clean-up Day” on 17th September 2022, which incidentally is also birthday of Prime Minister Narendra Modi celebrated as “Sewa Divas” in the country. He called upon all to join the massive clean-up drive on 17th September to be carried out at 75 beaches across the country with 75 volunteers for every kilometre of the coastline. He also added that this year’s event also coincides with the celebrations of Azadi Ka Amrit Mahotsav in the 75th year of the country’s independence.