In the winter months of 2007, astrophysicists from all over the world had made a beeline to observatories on mountaintops to observe a bright explosion born out of the cosmic dance of a white dwarf and its companion star resulting in thick dust around an imploding novae.

Dr R K Das, scientist from SN Bose Centre for Basic Science (SNBCBS) who had stationed himself at Mount Abu Observatory, and his team, observed the imploding novae called Nova V1280 Scorpii and found that a thick dust formed around it after a month and lasted for about 250 days.

The team from SNBCBS, an autonomous institute of Department of Science and Technology (DST) used the observed data on infrared spectra of the imploding novae and constructed simple models which helped them estimate its parameters like hydrogen density, temperature, luminosity and elemental abundances during pre- and post-dust phase. They have found high abundance of certain elements like carbon, nitrogen and oxygen in the ejecta along with a mixture of small amorphous carbon dust grains and large astrophysical silicate dust grains.

The dust formation was observed in parallel by international collaborators of the team from the Very Large Telescope Interferometer in Chile. This helped them take precision measurements of the rate of expansion of the dust shell around a nova for the first time.

The stellar event which was golden opportunity for scientists to study the exploding stellar matter was an example of space-dust collisions which could propel organisms over enormous distances between planets to start life on a planet. Their study of novae dust could help in understanding the nature and characteristics of the dust and associated processes.

Cosmic dust or extra-terrestrial dust formation in the hostile environment of novae ejection has been an open question for many years. Hundreds of kilograms of such dust fall on the Earth every day. However, formation, nature and composition of the dust are not properly understood yet. Dr. Das explained that dust formation in novae ejecta is not a common phenomenon. It has been observed only in a few novae within 30 to 100 days after an outburst, as compared to interstellar dust, which typically takes a few thousand years to form and hence provided opportunity to study the dust formation process in novae.

The team varied the parameters over a wide range and constructed more than fifty thousand models generating spectrum for each model. Finally, they fit the observed spectrum with the model generated ones. From the best fit, they estimated the parameters during pre- and post-dust phase. Such a detailed modelling of a dust forming Nova had never been done before. The entire process took a couple of years.

Besides high abundance of isotopes certain elements like carbon, nitrogen and oxygen in predust phase of the imploding novae as compared to solar values, the scientists found a mixture of small amorphous carbon dust grains and large astrophysical silicate dust grains present in the ejecta in the postdust phase. Some complex organic compounds like amorphous organic solids with a mixed aromatic–aliphatic structure were found which play an important role in formation of molecular cloud in stars and planets. The study was published in the journal Astrophysical Journal recently.

The team has suggested that as the expanding dust shell of V1280 Scorpii Nova continued to expand these dust grains will eventually mix with interstellar matter. But that will take thousands of years – a small time in the cosmic time scale. Figure 2: Evolution of the size of the circumstellar dust shell around V1280 Sco as seen by MIDI/VLTI (Chesneau et al., Astronomy & Astrophysics, 2008). 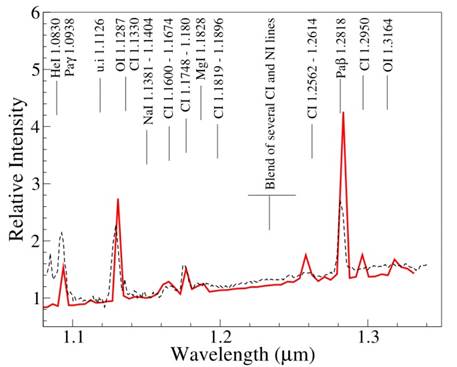