India remains committed to develop & popularise Chabahar Port in Iran till realisation of the Bilateral Contract signed by the leaders of Iran and India: Sarbananda Sonowal

The Union Minister of Ports, Shipping & Waterways and Ayush, Shri Sarbananda Sonowal paid a visit to the Shahid Behestti port at Chabahar in Iran to review the progress in the development of the port today. In an effort to invigorate the potential of Chabahar port, the Union Minister, Sarbananda Sonowal also handed over Six mobile harbour cranes to Indian Ports Global Chabahar Free Trade Zone (IPGCFTZ) at the port today. The Union Minister was accompanied by the India’s Ambassador to Iran, Gaddam Dharmendra. Dr Ali Akbar Safaee, Deputy Minister and Managing Director of Ports and Maritime Organisation, Iran, led the Iranian delegation at the launch today. Shri Sarbananda Sonowal and Dr Ali Akbar Safaee had a fruitful meeting on development of maritime and port cooperation between Iran and India. Both the delegation discussed the possibilities of trade & unlock trade potential between Central Asian countries with South Asian, ASEAN and even from Far East countries like Japan and Korea. The Union Minister, Shri Sarbananda Sonowal reiterated the role Chabahar port can play in reducing distance, time and cost. It was decided to form a joint technical committee for smooth functioning of the port. The meeting also addressed the future course of action towards development of the port. 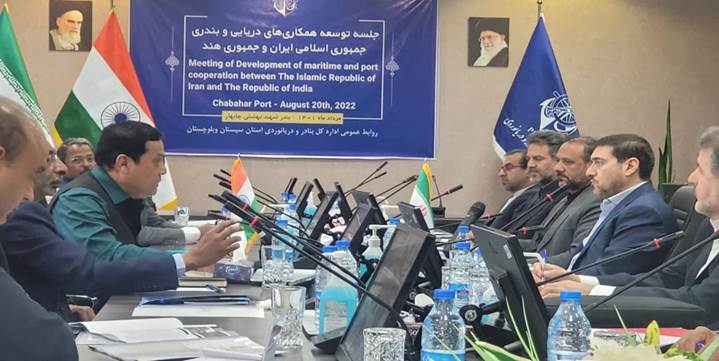 Speaking on the occasion, the Union Minister, Shri Sarbananda Sonowal, said, “Our shared historical relationship has been the seedbed of Indo Iranian bilateral relationship. The sustained engagement and all round efforts in the preceeding years provide an ideal platform for further expansion and deepening of the bilateral relation. India remains fully committed to develop the Chabahar port to realise the vision set during Indian PM Shri Narendra Modi ji’s visit to Iran in 2016.  The inauguration of the SIX mobile harbour cranes would act as a force multiplier for the operation of the Shahid Behesti Port and further fuel impetus  to the development of the Chabahar port. The strategic role of Chabahar port to unlock trade potential in the regional trade between Central Asia, South Asia & South East Asia is huge. We are continuously working towards making the International North South Transport Corridor as the preferred route of trade between the two regions.” 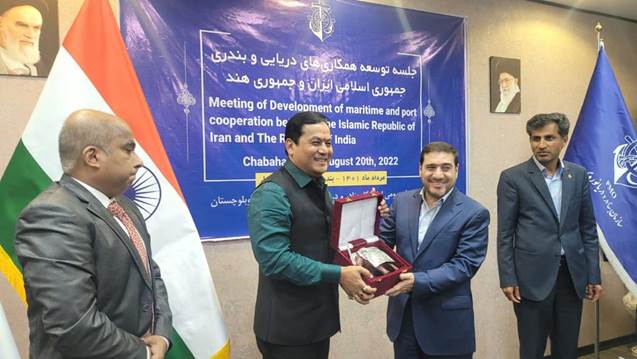 Since India Ports Global Private Limited (IPGPL) assumed operations of Shahid Beheshti Port, it has handled over 4.8 million tons of bulk cargo. The trans-shipment of goods were from varied countries including Australia, Bangladesh, Brazil, Germany, Oman, Romania, Russia, Thailand, UAE, Ukraine and Uzbekistan. With close cooperation between India’s IGPL and Iranian stakeholders including Iran’s Port and Maritime Organisation, Iranian Customs Administration and the Chabahar Free Zone Authority, Shahid Behesti Port Authority & other stakeholders, the Port is likely to act as a catalyst to unlock the huge trade potential in the region. The meeting was also attended by Mr Sepahi, Provincial Deputy Governor and the Governor of Chabahar City, Mr Ebrahimi, Interim CEO of Chabahar Free Trade Zone Organisation among other senior officials from Ministry of Ports, Shipping & Waterways, Government of India, the Indian Embassy and the officials from Islamic Republic of Iran.

The Union Minister, Shri Sarbananda Sonowal is on a three days official tour to Iran and UAE where he is slated to visit Chabahar Port in Iran and Jebel Ali Port in UAE. The visit is aimed at strengthening the ties and maritime relationship between the two nations. The visit also intends to highlight the importance of Chabahar port as a gateway for Indian trade with Europe, Russia and CIS countries.