Potential of Chabahar to act as a conduit for Central Asia, South Asia & South East Asia is pivotal to unlock trade potential in the region

Union Minister of Ports, Shipping & Waterways and Ayush, Shri Sarbananda Sonowal called on His Excellency, Vice President of Islamic Republic of Iran, Mohammad Mokhber at Tehran. The two leaders discussed about further bolstering the Indo Iranian bilateral relations. The Vice President, who is Iran’s Special Envoy for relations with India, appreciated the visit of India’s Shipping Minister as it provides  impetus to further the bilateral cooperation between the two countries. The development of Chabahar port would lead to increase in trade and shipment volume, the Vice President added. The Union Minister also underscored the importance for both sides to collaborate on further steps to be taken to make Chabahar port an instrument for regional growth in trade shipment. Speaking after his visit to His Excellency, the Vice President of Iran, Shri Sarbananda Sonowal, said, “Extremely pleased to meet his Excellency, Vice President of Iran, Mr Mohammad Mokhber where we discussed ways & means to further strengthen & consolidate the vibrant Indo Iranian bilateral relations. We continue to strengthen  our dynamic relationship with Iran. India’s Prime Minister, Narendra Modi ji, has asked me to communicate about the highest level commitment to further deepen & expand our relationship for a mutually beneficial one.” 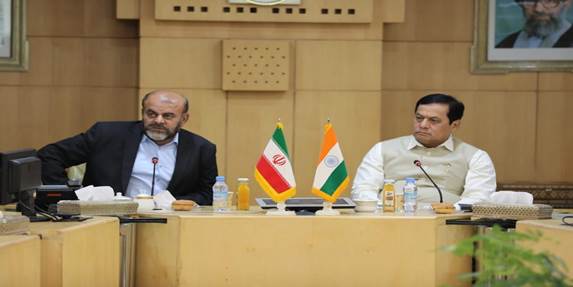 Earlier, Shri Sonowal attended a Bilateral meeting with His Excellency, Minister of Roads & Urban Development, Islamic Republic of Iran, Rostam Ghasemi. On this occasion, both the countries signed a Memorandum of Understanding (MoU) on recognition of Certificates of Competency in Unlimited Voyages to help seafarers from both the countries as per the provisions of International Convention on Standards of Training, Certification and Watch Keeping for Seafarers (1978). Shri Sarbananda Sonowal and Rostam Ghasemi had a fruitful bilateral meeting on deepening the Indo Iranian relations. The signing of the MoU is aimed at smoothening the movement of seafarers from both the countries. The Union Minister reiterated the importance of the bilateral relationship between the two countries. The role of Chabahar as a trade multiplier for the region was highlighted by the Union Minister at the meeting as the potential of the port to act as a swift, economical trade conduit between Central Asia and South Asia, even South East Asia, remains to be tapped fully.

Since India Ports Global Private Limited (IPGPL) assumed operations of Shahid Beheshti Port, it has handled over 4.8 million tons of bulk cargo. With close cooperation between India’s IGPL and Iranian stakeholders including Iran’s Port and Maritime Organisation, Iranian Customs Administration and the Chabahar Free Zone Authority, Shahid Behesti Port Authority & other stakeholders, the Port is likely to act as a catalyst to unlock the huge trade potential in the region.

In 2020, India supplied 75000 tonnes of wheat to Afghanistan as part of humanitarian assistance programme as well as provided for 40,000 litres of Malathion 96% ULV pesticides to Iran via Chabahar port in a concerted effort to mitigate locust threat to agriculture & enhance food security in the region. In an effort to invigorate the potential of Chabahar port, the Union Minister commissioned Six mobile harbour cranes to Indian Ports Global Chabahar Free Trade Zone (IPGCFTZ). Shri Sarbananda Sonowal is on a three days official tour to Iran. Following his Iran visit, the Minister will be on a day long official visit to UAE where he will pay a visit to Jebel Ali port and participate in Bilateral meetings as well as an investors meet.