Pritam Siwach Hockey Academy, Sonepat have topped the Phase 1 of Khelo India Women’s Hockey League (U-16), which concluded at the Major Dhyanchand National Stadium on Tuesday. The academy girls, coached by Kuldeep Siwach, won all of their 7 pool games with an incredible goal difference of +134; the team conceded just three times en-route to earning 21 points. 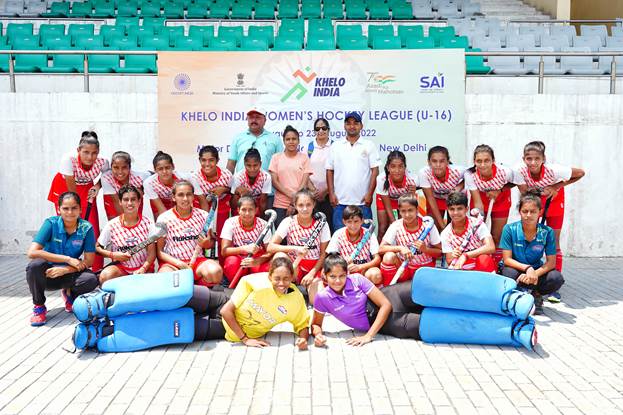 A total of 56 matches were played across seven days in the Phase 1, with a total of 16 teams participating. The one-of-a-kind Hockey league for the Sub Junior women, has been scheduled to take place over three phases. The Sports Authority of India allocated total money of Rs 53.72 Lakh for 3 phases of the competition, which includes Prize money of Rs 15.5 Lakh.

The winning team following the 3 Phases will be awarded with a cash prize of Rs 5 Lakh.

Speaking about the efforts put in by the Pritam Siwach Academy girls, Kuldeep Siwach mentioned, “My team did very well and they got a lot of motivation following every win. This was one of the best competitions to find out the flaws and work on them. These victories will inspire the girls to get the confidence to play for the country in the long run and keep working hard. I thank SAI and Hockey India for giving us the platform.”

Former Arjuna and Dronacharya Awardee Pritam Siwach, who has remained the inspiration behind the hockey academy, added that the U-16 competition will give the girls all the preparedness to be a part of the Khelo India Scheme. “It was incredible to witness such a competitive environment featuring the U-16 girls. I thank SAI and Hockey India to put forward such a competitive environment for U16 girls.

“We had a tournament for U21 as well and I thank the Government for making possible this great opportunity for the girls to showcase their talent. We have very less competitions in this level and the girls can only benefit from competitions such as these to come in the Khelo India Scheme and play for the country in future,” Pritam Siwach said.