Ministry of Electronics & IT Government is laser focused on achieving target of 300 billion USD electronic production by 2026: MoS Mr. Raje

Mr. Rajeev Chandrasekhar, Minister of State for Electronics & Information Technology and Skill Development & Entrepreneurship, launched a report titled as ‘Globalise to Localise: Exporting at Scale and Deepening the Ecosystem are Vital to Higher Domestic Value Addition’ here today. The report prepared by India Council for Research on International Economic Relations (ICRIER), in collaboration with India Cellular and Electronics Association (ICEA) explores how India can achieve electronics production target of US$300 billion and exports of US$120 by 2025-26. 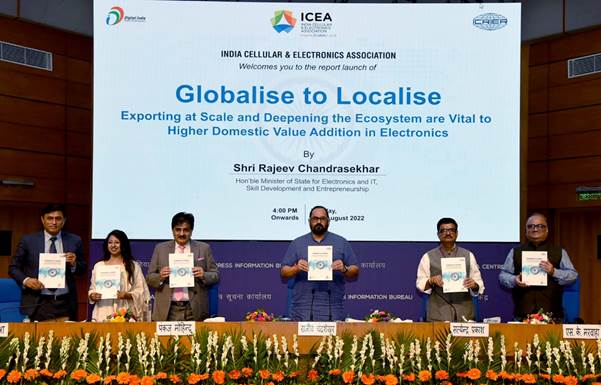 Addressing the event, Mr. Rajeev Chandrasekhar said, “The Government is laser focused on achieving the target of 300 billion USD electronic production by 2026. And for this, we have always emphasised on strengthening our domestic manufacturing ecosystem to make India more resilient to supply chain disruptions. Our aim is to emerge as a reliable and trusted partner in Global value chains.” 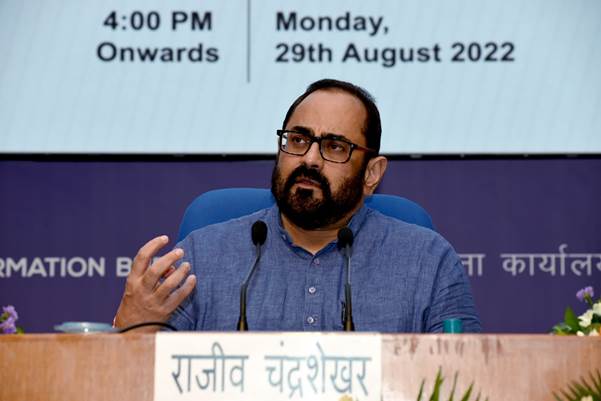 Launching the report, he said that it is very timely and will help the Government identify the challenges that are to be met and the strategies that are to be adopted to achieve this target.

The Minister said that India has succeeded in systematically building a framework and a strategy that has clearly outlined our goals of a 300 bn electronics manufacturing ecosystem with a 120 bn dollars of exports by 2026.

Talking about the journey of Electronics sector in India in last some years, the Minister said that

electronics in India has travelled a long way since 2014. We were, in 2014, a country that was increasingly dependent not just on petroleum imports but also on Electronics imports. Systematically Prime Minister Shri Narendra Modi over the years has built back an electronics sector. Today we are, as a consequence of policies of government led by Prime Minister Shri Narendra Modi, a 76 bn dollar manufacturing economy with 16 bn dollar of exports, with a target of 21 to 25 bn dollars of exports in next year. But most importantly by 2026, we have clearly laid out goal of 300 bn dollar manufacturing with a 120 bn dollar of exports. That strategy talks about broadening and deepening of the electronics ecosystem.

This report by ICRIA, the Minister said, is a very important and interesting element that describes what our strategy will be for next few years.

Highlighting the shift in global value chains in recent years, Mr. Rajeev Chandrasekhar said that post-COVID the value chains of electronics are undergoing deep tectonic irreversible changes. It presents to India, the current momentum and opportunity which is explained by the 120 bn dollars export target that India has for 2026.

Mr. Rajeev Chandrasekhar further added that this report postulates that we must export aggressively to reach the scale in electronics manufacturing. In addition to domestic production, and supplies and domestic consumption, the exports are important way to get the scales of the other economies that are competing with us. Exports will create a network effect of creating the supply chain interests, and supply chain investments that in turn will increase the value addition in the Indian electronics segment.

The report, Globalise to Localise, launched today, examines the empirical relationship between exports and the share of domestic value addition in successful exporting nations. It finds that the two variables are negatively correlated in the short-run, but exhibit positive correlation in the medium-term.

“Our study finds that China and Vietnam have adopted the mantra of ‘first globalise, then localize’, which means in the initial years they were determined to achieve global scale in exports, and then shifted their emphasis to greater use of local contents,” said Dr. Deepak Mishra, Director and CE of ICRIER and the lead author of the report.

The report, therefore, recommends a sequential approach that can put India’s exports in the same trajectory as China and Vietnam. The immediate goal should be to export at scale to global markets (globalise), and the subsequent objective should be to increase the share of local content (localise). The report suggests several steps and policies needed for deepening the broader electronics ecosystem within India. Additionally, policies such as Gati Shakti will also help increase India’s competitiveness.

Echoing the findings of the report, Mr. Pankaj Mohindroo, Chairman of ICEA said “We have resurrected this industry after near total collapse in 2014. As a first step, we used PMP to build a USD 36 bn mobile industry. We are now pushing for global exports via PLI and a total production of USD 300 bn. With exports as our key focus, we are working on policies that will increase domestic value addition over the next few years. The world is looking to us for delivering on our potential!”

ICEA is the apex industry body for the mobile and electronics industry comprising manufacturers, brand owners, technology providers, VAS application & solution providers, distributors, and retail chains of mobile handsets and electronics. ICEA is committed to carrying forward its vision of building Indian manufacturing and design in verticals other than mobile handsets while consolidating the gains made in the mobile handset and components industry. ICEA is entirely devoted to improving the competitiveness and growth of the industry by closely working with the Government’s ministries to create a robust, legal, and ethical electronics industry, thereby creating an innovative market environment in the country.