The Union Minister of Agriculture and Farmers Welfare, Shri Narendra Singh Tomar has said that our agricultural scientists have made great progress through research, India is today at first or second place in terms of most food produce. Shri Tomar said that the hard work of farmers, farmer friendly policies of the government and research of scientists have contributed in this achievement and we stand at the forefront globally in terms of agricultural produce.

“Now that the climatic conditions are changing, this challenge has to be dealt with. Now there should be self-sufficiency in pulses and oilseeds also. For this the government is working in mission mode, but along with policies and funding, the invention of seeds should be such that it increases productivity and takes the country towards self-reliance. Agricultural scientists have a huge responsibility in this, and they need to do more work,” said Shri Tomar at the launch of the 11th National Seed Congress-2022 organized by the Rajmata Vijayaraje Scindia Agriculture University at Gwalior today. Union Civil Aviation Minister Shri Jyotiraditya Scindia virtually joined the programme, while Madhya Pradesh Agriculture Minister Shri Kamal Patel was present. On this occasion the newly constructed auditorium of the University was named after the late Dattopant Thengadi. Simultaneously the State Academy of Agricultural and Allied Sciences (SAAS) was launched. The efforts of NAAS at the national level and SAAS at the regional level will further accelerate the activities of agriculture, horticulture, animal husbandry science and promotion of related research and education. 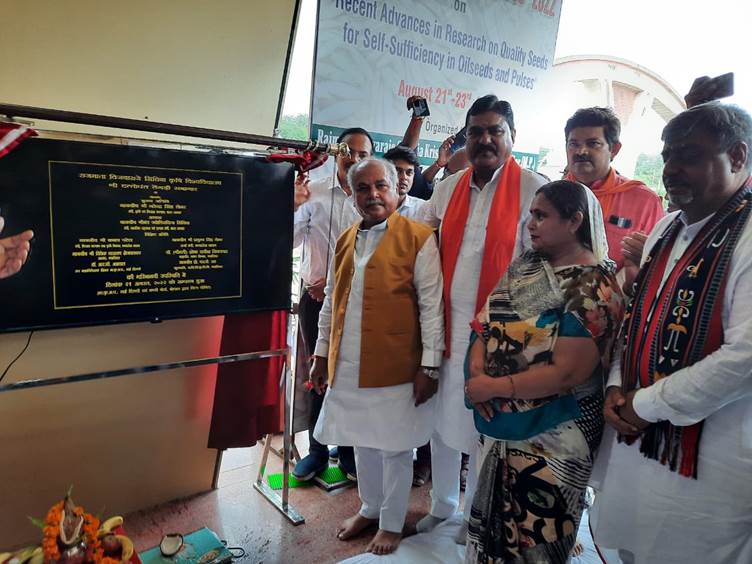 ShrTomar said that the late Thengadi was an intellectual, nationalist thinker, labour activist and trade union leader. He put the interests of the workers and peasants first. Thengadi ji emphasized the Swadeshi spirit, which strengthened the nation with local industries and created a large number of employment opportunities. It is inspiring to have an auditorium in the name of Thengadi ji.

Initially the Vice Chancellor Prof. S. Koteshwara Rao delivered the welcome address. Dr. R.C. Agrawal, Deputy Director General, Indian Council of Agricultural Research; Shri Ashwini Kumar, Joint Secretary (Seeds), Union Ministry of Agriculture and Farmers Welfare and other dignitaries also addressed the gathering. In the programme, the Registrar, Shri Anil Saxena along with the University officials, scientists of Krishi Vigyan Kendras, farmers and students were present on the occasion. In this event, deliberations will be held on the new experiments in the field of improved seed production in the country, keeping in view the future requirements and a policy will be framed on the strategy of improved seed production, especially of oilseeds and pulses. Eminent seed production experts of the country are participating in this three-day conference. Union Minister Shri Tomar distributed various awards at the function.