​​​​​​​Where education system since independence fell short, AIR and Doordarshan told the stories of over 500 unsung heroes of independence struggle: Shri Thakur

“Ye Akashvani Hai”, the immortal words that every Indian can identify, resonated in the Rang Bhawan auditorium at Akashvani Bhawan today as Shri Anurag Thakur uttered them, appending it with “aur aaj aap soochana prasaran mantri ko sunn rahe hain”. These opening words marked the celebration of National Broadcasting Day today, the day All India Radio had begun its, what was going to turn out to be a long and glorious journey, in 1927.

Addressing the gathered audience Union Minister Shri Anurag Thakur said that when some people surmised that Radio was going to have an existential crisis with the advent of Television and subsequently internet, radio has identified its audience and not just maintained its relevance but also its credibility.

He added that today, when people want to listen to unbiased news, they naturally tune in to All India Radio and Doordarshan news. That 92 percent of the country’s geography and over 99 percent of people are covered by All India Radio is a commendable achievement, he said. 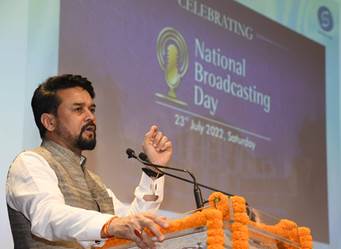 The Minister sounded a cautious note to the media and said that if somewhere a wrong perception is getting created about private media with utterances of ‘media trails’, then we need to introspect about our functioning.

Crediting the role of the two entities All India Radio and Doordarshan in delivering on the essence of Azadi Ka Amrit Mahotsav, the Minister said that when the education system since independence did not mention the role of many regional freedom fighters, Radio and Doordarshan curated information about over five hundred unsung heroes from the remotest corners of the country and presented it to the nation celebrating their contribution to the freedom struggle.

The Minister of State for Information and Broadcasting Dr L. Murugan conveyed his best wishes to the audience on the occasion of National Broadcasting Day. Dr Murugan highlighted the important role played by Radio during freedom struggle when many freedom fighters employed it as a tool for communication against the British imperial government. He recognized the role played by radio in connecting the remotest corners of the country and expressed pride in Prasar Bharti being the biggest public broadcaster in the world.

Chief Executive Officer, Prasar Bharti, Shri Mayank Agarwal underlined the importance of the two mediums viz Television and Radio and said that the news content on the platforms has fared better that private media in trustworthiness and this has been brought out by various surveys.