The Union Minister for Agriculture and Farmers Welfare, Shri Narendra Singh Tomar has said that for the first time since Independence, an initiative has been taken to honour the farmers. Shri Tomar said this at the inaugural session of the two-day International Conference on “Harnessing Indian Agriculture for Indigenous and Global Prosperity” in New Delhi, organized in collaboration with the Indian Council of Agricultural Research (ICAR) on the occasion of Azadi ka Amrit Mahotsav.

“The farmer is not despondent, hungry or poor, rather there is a need to get out of this terminology. The farmer may be poor, he may own small fields but in spite of this he not only supports his family but also contributes to the agricultural economy of the country. Farmers and farming should be treated with honour. When Prime Minister Shri Narendra Modi made a scheme to support farmers income, he named it as Kisan Samman Nidhi with a sense of pride. Under this scheme, Rs. 6,000 are given to the farmers every year and till now about Rupees two lakh crore have been given to about eleven and a half crore farmers by direct credit into their bank accounts,” he said.

Shri Tomar said that under the leadership of Prime Minister Shri Modi, the Government of India is working on various fronts to make the country a healthy and leading nation, while the Prime Minister gives priority to the villages, poor people and farmers.

“Development of villages, eradication of poverty, elimination of inequality, prosperity of farmers and development of agriculture is the priority of the Modi government. Central and State governments and scientists are working on this priority, while farmers are also working hard. As a result of this we see that India is moving towards prosperity day by day. For this prosperity to spread further, there is a need to discuss and solve the existing challenges before Agriculture, which is the focus of the Government, but without the cooperation of the society, it is impossible to execute all the reforms,” he said.

Shri Tomar said that to attract people towards Agriculture, as well as increase profits in this sector, there is a need to focus on raising productivity and income.

“The Central Government is working in this direction with the States, the results of which are beginning to show. The cost to the farmer should be low, he should be supported with technology, the doors of private investment in farming should be opened, farmers should shift towards remunerative crops, market access should improve and there should be no exploitation of the farmers, our aim should be to strive for such an administrative system. And such system should also be adopted from the social point of view. Prime Minister Shri Modi, after assuming office, had said that the farmers’ income should be doubled. The acceptance, popularity and impartiality of Prime Minister Shri Modi is so much in the country and across the world today that the nation has accepted his call as a mantra. This also reflects how much power is there in the leader’s words. The Centre and State Governments, officials and scientists, farmers and farmers organizations all took this matter with a new speed and force. The Government has made plans in this direction, doors have also been thrown open to private investment and technology in the agriculture sector. As a result, educated youth of the new generation have also started getting attracted towards Agriculture, this is a very auspicious sign. Now this path has been opened, but to make it stronger and wider in our vast country, everyone will have to work together. Due to India’s clear policy and determination, the country’s credibility has increased in the global forums,” he said. 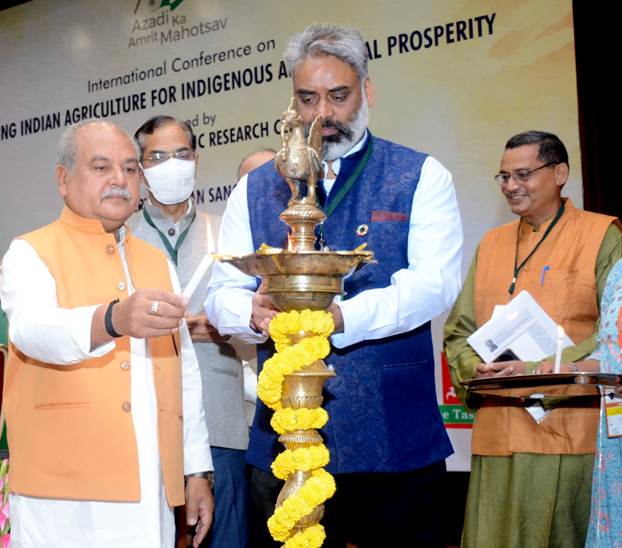