The Central Administrative Tribunal, Guwahati Bench adjudicate the service matters of the not only the Central Government civilian employees posted in all the 7 (seven) North Eastern States of India – Assam, Meghalaya, Manipur, Mizoram, Tripura, Nagaland and Arunachal Pradesh and also of the employees of the notified organisations posted in this Region. Since its inception, the Guwahati Bench has been functioning from a rented building at Rajgarh Road, Bhangagarh which is presently in dilapidated condition and lacks basic amenities for proper functioning of the Bench. Therefore, there was always a constant demand from the stakeholders to have own office-cum-court-complex of the Bench with sufficient space and other state-of-the-art amenities, which with this Foundation Stone Laying Ceremony will be fulfilled in near future.  After assumption of charge as Chairman, Central Administrative Tribunal by the Ms Manjula Das on 01.08.2021, the matter for transfer of a suitable plot of land was vigorously taken up with the Government of Assam right upto the level of the Chief Minister of Assam and due to his kind intervention, plot was transferred in a very short span of time. Ms Manjula Das, Chairman specially thanked Dr.HimantaBiswaSarma, Chief Minister of Assam, Officers in the Revenue Department and also to Sri Pallav Gopal Jha, DC, Kamrup (Metro) and his expert team in this regard.

The Chairman expressed her sincere thanks to the Prime Minister of India and Dr.Jitendra Singh, MoS, Ministry of Personnel, Public Grievances & Pensions for immediate release of necessary funds paving the way for construction of the court-cum-office building. In her speech, the Chairman thanked the CPWD, Assam Police and felicitated members of the legal fraternity as well officers of the Tribunal for their significant contribution to the organisation. Hon’ble Chairman also granted Rs.1 lakh to the CAT Bar Association, Guwahati Bench as Grant in Aid. 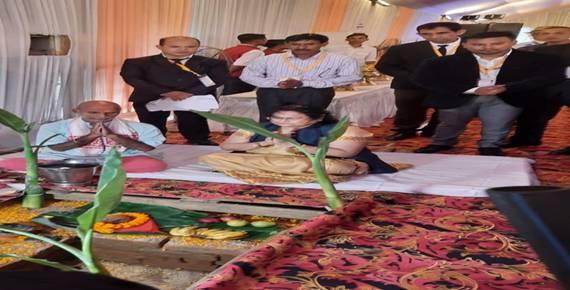 Mr. Justice N. Kotiswar Singh, Judge of the Gauhati High Court in his address to the august gathering as Chief Guest, said the Judiciary is one of the important limbs of democracy and democracy without independent judiciary is hollow. He expressed his happiness that during the tenure of Ms. Manjula Das as Chairman, construction of CAT’s own building has started. He expected that the new building will have all the facilities for the stakeholders.

Mr. Justice B K Sharma, retired Judge of High Court in his address as Guest of Honour recollected his long association with CAT and stressed the requirement of specialised knowledge of the rules and regulations in service matters for practice in CAT which is uncommon in High Court.

The event was marked by the depiction of Assamese culture with Bihu dance, recital of classical flute by Dilip Hira in the beginning and ended with the “Bhumi Pujan” by the Chairman, CAT, Judges of Gauhati High Court and other dignitaries.