CCPA issued 129 notices: 71 for misleading, 49 for unfair trade practice, and 9 for violation of consumer rights

CCPA completed its two years of glorious establishment on July 24, 2022. While addressing media persons, Ms. Khare said that CCPA so far has issued 129 notices, 71 for misleading, 49 for unfair trade practice, and 9 for violation of consumer rights. The first Safety Notice was issued with regard to Helmets, Pressure Cookers and Cooking gas cylinders and the second Safety Notice was issued with regard to household goods including electric immersion water heaters, sewing machines, microwave ovens, domestic gas stoves with LPG etc. CCPA has also issued Safety Notices to alert consumers against buying household goods which do not have valid ISI mark, like electric immersion water heater, sewing machine, aluminum foil for food packaging etc. Violation of compulsory standards for such goods endangers public safety putting consumers at the risk of suffering severe harm or injury. In furtherance of the campaign, CCPA has taken suo-moto cognizance against e-commerce entities found to be selling Pressure Cookers in violation of the Domestic Pressure Cooker (Quality Control) Order, 2020 issued by the Central Government under Section 16 (1) of the BIS Act, 2016 on 21st January 2020.

The power of CCPA to take Class action is a unique feature that was not present in the previous Consumer Protection Act, of 1986. Before the 2019 Act, there was no mechanism to deal with issues of unfair trade practices and misleading advertisements which impacted consumers as a class. As a result, such practices continued unrestrained, without any accountability. The establishment of the Central Consumer Protection Authority (CCPA), with powers to pass orders of discontinuation of practices that are unfair and prejudicial to consumers’ interests and impose penalties in case of false or misleading advertisements is another means of relief to the consumers apart from approaching the commissions. CCPA through class action protects the right of the consumers even the sleeping consumers who are unaware of their rights. CCPA has ordered discontinuation of advertisements of Sensodyne products which make the claims “Recommended by dentists worldwide” and “World’s No.1 sensitivity toothpaste” within seven days and “clinically proven relief, works in 60 seconds” where CCPA directed payment of a penalty of ₹10 lakh and the penalty has been paid. Also, advertisements which show endorsements by foreign dentists have been ordered to be discontinued as per the earlier order passed by CCPA. 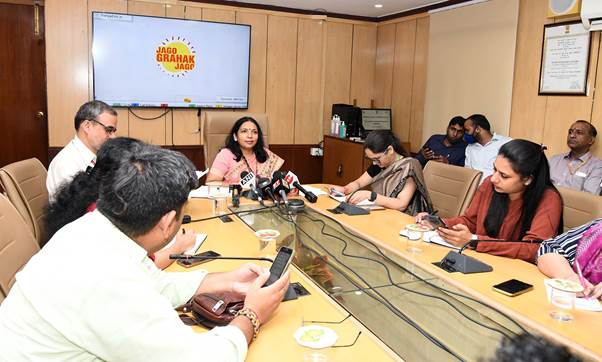 Further, CCPA has directed the discontinuation of ‘Sure Vision’ advertisement and imposed a penalty of Rs 10 Lakh over false and misleading claim which has been paid by Sure Vision. The order was passed against Sure Vision India regarding misleading advertisements for its product “Sure Vision” which claims that ” Sure Vision improves eyesight naturally; Eliminates eye strains; Exercise the culinary muscles; World’s best unisex correction apparatus”. The company was not able to substantiate its claims related to the efficacy of the product made out in the advertisement. And the penalty of Rs. 10,00,000 was also imposed on the Naaptol regarding ‘Magnetic Knee Support’, ‘Acupressure Yoga Slippers/Acupressure massage slippers’, and ‘Gold jewelry of Rs. 200’ for making false claims regarding their product without any scientific credibility/reports.

To protect the consumers on E-commerce websites the CCPA issued an advisory to all the E-commerce market places to disclose the details of the seller and complete details of the product being sold on such websites. The CCPA is also working to develop a framework to check fake reviews on E-Commerce websites. For this, a Committee involving all the stakeholders has been constituted. In his regard, the CCPA has imposed a penalty of Rs. 1,00,000 on Paytm Mall which is paid, for listing pressure cookers on its platform despite the product do not conform to compulsory BIS standards. Central Consumer Protection Authority has issued notice to Ola and Uber on violation of consumer rights and unfair trade practices. In addition, the issues raised were lack of proper consumer grievance redressal mechanism, deficiency in service, unreasonable levy of cancellation charges and fairness of algorithm used to charge fares among major issues raised by CCPA. Further, Guidelines on Prevention of Misleading Advertisements and Endorsements for Misleading Advertisements, 2022 were also issued. The guidelines seek to ensure that consumers are not being fooled with unsubstantiated claims, exaggerated promises, misinformation, and false claims.

Compulsory payment of the Service Charge is one of the major issues faced by the consumers on which the CCPA has issued Guidelines on Service Charge making it to be paid voluntarily/optional by the consumer. The CCPA also keeps its focus on the health of the consumers in this regard an Advisory to e-commerce entities is issued by the authority for stopping the sale of Ayurvedic, Siddha, and Unani drugs without a valid prescription of a registered Ayurveda, Sidha, or Unani practitioner. Advisory on the wireless jammers is also a stone turned in the way of consumer protection the e-commerce platforms are hereby advised to refrain from selling or facilitating the sale of any kind of wireless jammers.

The CCPA in lieu of the Honourable Prime Minister Narender Modi Ji’s LiFE movement (Lifestyle for Environment) in India i.e. reduce, reuse and recycle of the products, observed that countries like the USA, the U.K., and Unions like European Union have enforced the reformative law on the Right to Repair for protecting the rights of consumers and making a fair play in the market, the need was felt in India as well. All types of reuse require repair, and even the sustainable life of the products depends on it.

In addition to becoming e-waste, devices that cannot be repaired or fall under planned obsolescence, or creating a product with an artificially limited useful life, drive consumers to acquire new products because they cannot be repaired to be reused. Therefore, limiting product repair forces the buyer to consciously choose a new model of that product. As a result, the authority is working towards bringing in the framework on Right to Repair so as to reduce e-waste. The “Right to Repair” concept is based on the idea that a product must be completely owned by the person who owns it in order for them to be able to repair and improve it as they see fit. Additionally, the components of products should be made available to third-party repairers.

The CCPA does not aim at curbing innovation or putting restrictions on the companies but works towards building such an ecosystem that promotes the business as well as protection of the consumer’s rights. CCPA has taken active steps in modernizing the legal framework on consumer protection to keep pace with the changes in markets to ensure fair, equitable, and consistent outcomes for consumers

On its anniversary CCPA celebrates another year of glorious success in the protection and promotion of consumer rights as a class in this ever-changing marketplace. With the emergence of global supply chains, rise in international trade and the rapid development of e-commerce, new options and opportunities became available to consumers. Consequently, this also made consumers susceptible to new forms of unfair trade and unethical business practices. Misleading advertisements, telemarketing, multi-level marketing, direct selling and e-commerce posed new challenges to consumer protection and required appropriate and swift executive interventions to prevent consumer detriment.