“Yoga is Excellence in action. If you excel in your chosen field and perform your duties honestly, the nation will certainly progress faster”: Vice President, Shri M. Venkaiah Naidu

Ministry of Culture “Yoga is Excellence in action. If you excel in your chosen field and perform your duties honestly, the nation will certainl

“Yoga is Excellence in action. If you excel in your chosen field and perform your duties honestly, the nation will certainly progress faster”: Vice President, Shri M. Venkaiah Naidu

“Yoga is an invaluable gift from our ancient tradition.
Yoga embodies unity of mind and body, thought and action”:

The 8th ‘International Day of Yoga 2022’ was celebrated in the city today at the Parade grounds led by the Hon. Vice President of India, Shri Venkaiah Naidu and Union Minister for Tourism, Culture & DoNER, Shri. G. Kishan Reddy. Organised by the Ministry of Tourism, the event saw a huge turnout of Yoga enthusiasts who braved the light showers and performed yoga in the early hours of the morning. Badminton star, Padma Bhushan and Arjuna Awardee Ms. PV Sindhu and the Telugu movie star Shri Adivi Sesh, also took part in the mega event today.

Addressing the gathering on the occasion, Vice President Shri Venkaiah Naidu described Yoga as ‘to join’ or ‘to unite’, which emphasizes the unity and harmony between the mind and body, and man & nature. “On this occasion, I would urge everyone to work for the unity and harmony among all sections of the society”, he said. Shri Naidu urged people to take inspiration from our ancient philosophy and work for not just transforming our minds and bodies, but also the overall transformation of the nation. Highlighting the theme for Yoga Day this year, ‘Yoga for Humanity’, the Vice President underlined the role that Yoga plays in ensuring holistic physical and mental health among the people. Quoting from the Gita, he described ‘Yoga’ as ‘Excellence in action’ and wanted this to be the ‘mantra’ for every Indian to take the country forward. “If you excel in your chosen field and perform your duties honestly, the nation will certainly progress faster”, he added.

The Union Minister for Tourism, Culture & DoNER, Shri. G.Kishan Reddy  highlighted the benefits of doing Yoga in everyday life and said that “Yoga is an invaluable gift from our ancient tradition. Yoga embodies unity of mind and body, thought and action. It is a holistic approach that is invaluable to our health and our well-being”. He further added that “Yoga is not just about exercise, it is a way to discover the sense of oneness with yourself, the world and nature. Shri Kishan Reddy said that with the efforts of PM Shri Narendra Modi, Yoga has spread far and wide even at the global level. 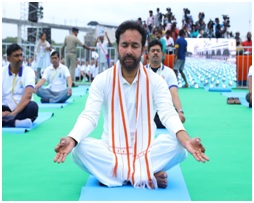 This year, as the country is celebrating its 75 years of its independence, the Ministry of AYUSH had identified 75 different iconic locations across the country Leh Palace in Ladakh to Vivekananda Rock Memorial in Kanyakumari where various Union Ministries led the Yoga performances and demonstrations. In the event at the Parade ground today, nearly ten thousand people participated including members of Legislative Assembly, officials of the Tourism Ministry, delegates from state government, various Yoga institutes, central government organisations like CISF, CRPF, NYK, IHM and NCC.