Ministry of Communications India to contest for re-election to International Telecommunications Union (ITU) CouncilMs. M. Revathi proposed as I

India shares dream/vision of ITU, to realize the world, as connected society, and enabling ICTs, to accomplish SDGs 2030: Shri Devusinh Chauhan at WSIS 2022

“India, under the leadership of the Honourable Prime Minister, Shri Narendra Modi Ji, has been at the fore front, of global digital transformation, achieving excellence in development, and use of Information and Communication Technologies,” said Shri Devusinh Chauhan, Minister of State for Communications during World Summit of Information Society (WSIS) 2022. Shri Devusinh Chauhan, led the Indian Delegation to participate in WSIS 2022 during 31st May – 3rd June 2022 in Geneva, Switzerland.

WSIS is co-organized by International Telecommunications Union (ITU), United Nations Educational, Scientific and Cultural Organization (UNESCO), United Nations Development Programme (UNDP) and United Nations Conference on Trade and Development (UNCTAD), in close collaboration with all WSIS Action Line co-/facilitators and other UN organizations. It is an on-going process since WSIS Summit in 2003 to take forward initiatives in building the information society for the world community.

India is contesting, for re-election, to the ITU Council, for the term 2023-2026. India has been a member of ITU since 1869 and has been continuously participating, actively in the works, and activities of the Union, and has been contributing, to the fullest possible extent, in the growth and development, of Telecom/ICTs, for the benefit of global community.

Speaking at the reception for introducing India’s Radio Regulations Board (RRB) Candidate and ITU Council candidature of India for re-election, Shri Devusinh Chauhan said that India shares the dream, and vision of ITU, to realize the world, as connected society, and enabling ICTs, to accomplish the Sustainable Development Goals 2030.

Shri Devusinh Chauhan reiterated India’s firm commitment, to contribute to the realization, of the ITU’s goals and appealed the participants, to support, India’s candidature, for ITU Council, and Ms. Revathi’s candidature, for RRB.

During the event, the Minister participated in the several sessions including High-Level policy session on “Bridging the Digital Divide”, Ministerial Round Table meeting on ICT for well being, inclusion, and resilience and a High level Dialogue on Artificial Intelligence (AI). While delivering high level policy statement on digital divide, he apprised the global forum about the Indian Government’s initiatives like Bharatnet to cover all 6 lakh villages, umbrella mobile coverage for all villages, high speed internet access to all and many other initiatives. Also apprised that India successfully got a customised standards approved which will help in spreading 5G in rural areas.

On the sidelines of WSIS 2022, Minister of State for Communications, Shri Devusinh Chauhan held multiple bilateral meetings and met several dignitaries and excellencies such as the Deputy Secretary of ITU, Mr. Malcom Johnson, Minister of Communications and Information Technology of Iran, Mr. Issa Zarepour, Vice Minister of Policy Co-ordination of Japan, Mr. Yuji Sasaki, Secretary General of ITU, Mr. Haolin Zhou. The Minister presented them with a miniature memento of the World’s largest Statue, The Statue of Unity (Shri Sardar Vallabhbhai Patel). 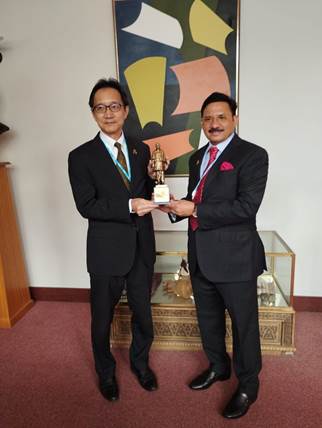 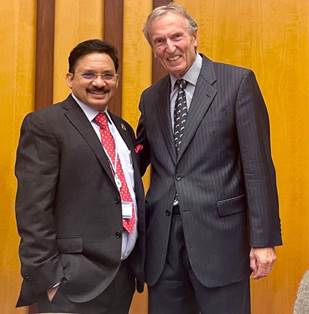 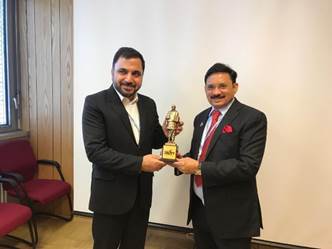