IDY 2022 will mark a revolution in the way we perceive and approach health and well-being: Shri Sarbananda Sonowal

AYUSH IDY 2022 will mark a revolution in the way we perceive and approach health and well-being: Shri Sarbananda Sonowal Posted On: 17 JUN 2

IDY 2022 will mark a revolution in the way we perceive and approach health and well-being: Shri Sarbananda Sonowal

Ayush Minister Shri Sarbanand Sonowal said today that the upcoming International Day of Yoga (IDY) won’t just mark a day in the calendar of cultural events, but it will mark a revolution in the way we perceive and approach health and well-being. Addressing media persons in a press conference in New Delhi the Minister informed that the preparations to commemorate the IDY are in full swing. He further said that through this day, we aim to accelerate the adoption of the traditional practice and remind the world of its benefits for the mind, body, and soul. 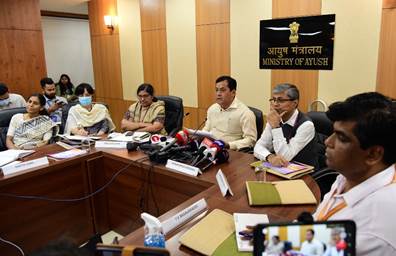 The Ayush Minister informed media persons that this year’s theme considers the geopolitical dilemmas being faced by the world and seeks to help everyone channel their altruistic and empathetic selves.

The Ayush Minister further informed that falling in the year of Azadi Ka Amrit Mahotsav, the International Day of Yoga will be observed around 75 iconic locations in the country. He also said that the day would also witness the innovative ‘Guardian Ring’ program, which will see the streaming of all the events being organized by Indian missions abroad, beginning from the eastern part of the globe and heading towards the west along with the Sun’s movement across 16 time zones. Around 80 countries will participate in the unique ‘relay’ program.

The press conference was organised by the Ministry of Ayush to share the plans and arrangements being made to celebrate the 8th edition of the International Day of Yoga (IDY) 2022 in Mysuru.

The theme of this year’s International Day of Yoga across the globe, is ‘Yoga for Humanity’, as announced by Prime Minister Shri Narendra Modi in his Mann ki Baat address.

The Minister also launched Common Yoga Protocol booklet and a film on IDY during the press conference.

The Prime Minister will lead the IDY 2022 celebrations from the Mysuru Palace Grounds on June 21, 2022. The event will also witness the participation of Shri Basavaraj Bommai, Chief Minister of Karnataka. Nearly fifteen thousand yoga enthusiasts will perform yoga, and the event will be organized with the support of members of parliament, departments of the Government of Karnataka, ministers, dignitaries, revered yoga gurus, and institutions. A static and a digital exhibition have also been organized at the Dasara grounds that will appeal to beginners and experts alike and will give a holistic view of the rewarding world of Yoga.

This flagship event of the Ministry of Ayush, Government of India is being co-organized with the Morarji Desai Institute of Yoga. The Government of Karnataka has formed 14 committees to ensure the event is conducted to the highest standards of excellence.

The 100-day countdown campaign, which was launched by the Ministry of Ayush in March of this year, has contributed towards gathering a massive momentum across 100 cities and 100 organizations. The program will be live-streamed on DD India. The live streaming will begin at 3 a.m. and will continue till 10 p.m. (Indian Standard Time).