Ministry of Youth Affairs and Sports After sweeping 5 gold in rhythmic gymnastics, Maha’s Sanyukta sets her eyes on Paris Olympics Posted On:

A gymnast by default, Maharashtra’s Sanyukta Kale swept all the five gold medals at stake in rhythmic gymnastics in the Khelo India Youth Games. 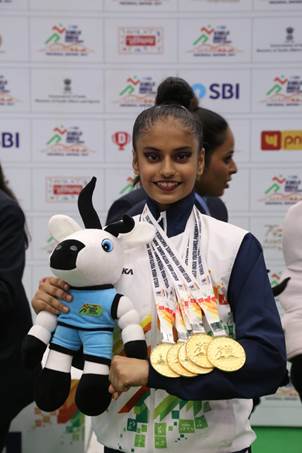 “As far back as I can remember, I knew that I wanted to be in sports. The only hitch was that I didn’t know which one,” a beaming Sanyukta said on Tuesday after her stunning sweep.

The now 16- year-old tried her hand at several popular sports, including tennis, football and cricket. But then, she discovered her calling: rhythmic gymnastics.

She was only 5 then. “It was like magic. I couldn’t think of any other sport after that,” she revealed.

Sanyukta’s mother Archana Kale was understandably ecstatic. “We were expecting her to do well. But this is truly beyond our expectations,” she said.

“I am still absorbing it,” Sanyukta said. “I thank all the people responsible for making me a champion,” she added, the five gold medals glistening around her neck.

Sanyukta believes that this is only the beginning. Her first goal is to get into the Indian team; her ultimate dream is to win a medal in the Paris Olympics in 2024. And she doesn’t even blink her eyes when she reveals where her sights are set: the gold medal.

“Yes, the CommonWealth Games first, then the Asian Championship, the World Championships and ultimately the Paris Olympics.

The journey has been long and arduous. But Sanyukta doesn’t rue the time she has devoted to the sport. “I have committed all my time to gymnastics. A lot of effort has also gone into becoming the gymnast that I am today,” she said.

“I thank my guru Pooja Surve for all the medals I own. She has only honed me into a champion,” she said.

“Sanyukta is a promising athlete. She will last the distance and is a great medal prospect for the country,” Pravin Dhage, the coach accompanying the Maharashtra gymnastic team, confirmed.

Rhythmic gymnastics comprises rope, hoop, ball, clubs and ribbon. Each of them requires a lot of agility and Sanyukta demonstrated mastery over them. None of her co-competitors could even come close to her,” Dhage added.