Gates of development have opened for J&K after the abrogation of Article 370:  Ramdas Athawale

Union Minister of State for Social Justice and Empowerment, Government of India, Shri Ramdas Athawale today said that Government of India wants a peaceful and developed J&K and is committed to develop Jammu and Kashmir on all fronts. The Minister said this while interacting with the media during a press briefing held at Convention Centre, Jammu.

Shri Ramdas Athawale said that after the abrogation of Article 370 in 2019, the gates of development have been opened for Jammu and Kashmir which is evident from the fact that all the centrally sponsored schemes and programmes are now implemented in J&K be that the Pradhan Mantri Awas Yojana, Jan Dhan Yojana, MUDRA, PM Ujjwala Yojana, Scholarship Schemes for Students, Welfare Schemes for Scheduled Castes, Scheduled Tribes and Other Backward Classes. 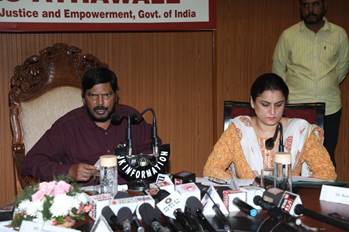 Shri Athawale further said that hundred percent implementation of many central schemes in J&K is witness to the fact that Govt. of India is steadfast to provide social stability at all fronts be that housing, livelihood etc to the people of J&K. 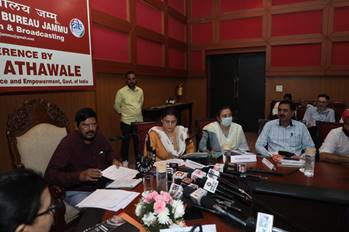 Shri Athawale while addressing the media said that under PMAY (Urban) in Jammu Division, 18590 are the approved beneficiaries out of which 4568 houses have been constructed, under PMAY (Rural), 131945 have been approved, out of which 80008 have been constructed in Jammu Division. Under PM Jan Dhan Yojana, 2641995 accounts have been created in J&K in which 1192312 have alone been created in Jammu division and under PM Ujjwala Yojana, 1316924 gas connections have been provided in J&K, the Minister informed the media. 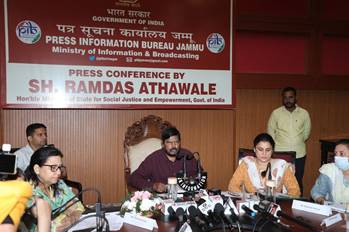 Loading...
Newer Post
CCI organises a National Conference on Competition Law to celebrate the Azadi ka Amrit Mahotsav as part of Iconic Week of Ministry of Corporate Affairs in New Delhi
Older Post
Holy Relics of Lord Buddha to be taken from India to Mongolia for an 11-day exposition on occasion of Mongolia’s Buddha Purnima on 14th June, 2022
Readout of White House Meeting with Attorneys General Nessel of Michigan and Ellison of Minnesota on Reproductive Rights