The installation of the idol of Raja Ram Mohan Roy is our way of paying a true tribute to him: Shri G.K Reddy

The Governor of West Bengal, Shri Jagdeep Dhankhar, said that future generations must continue to follow the ideas of Ram Mohan Roy. 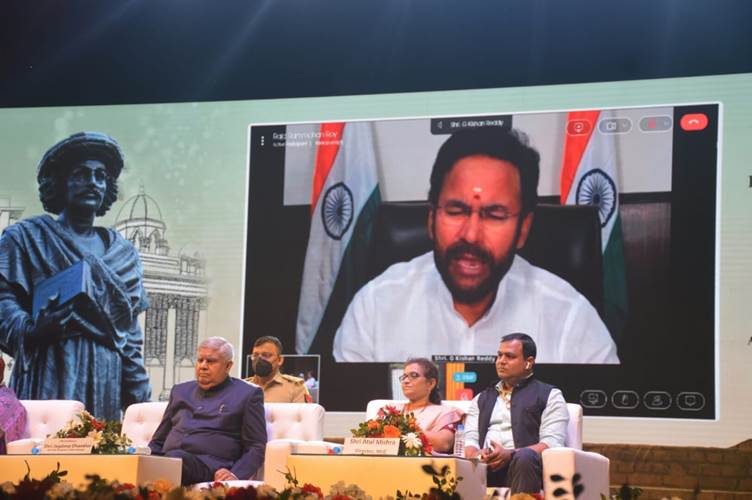 During his address the Union Minister said, “Today,on the 250th birth anniversary of Raja Ram Mohan Roy ji, on behalf of the Prime Minister Shri Narendra Modi ji and the Central Government, I would thank and pay my regards for his great contribution for the emancipation of our Indian society. It is a wonderful coincidence that today is the 250th birth anniversary of the great social reformer and the Historical 50 Years of Raja Ram Mohan Roy Library Foundation is also being completed”. He added, “As we all know that “Azadi Ka Amrit Mahotsav” is an occasion to pay respect and remember our great men and heroes who sacrificed their lives for the independence of our country. The installation of the idol of Raja Ram Mohan Roy is our way of paying a true tribute to him. I congratulate the Raja Ram Mohan Roy Library Foundation for this important step. The statue of this great man will inspire us and our younger generation. It will remind all of us about the great deeds, high ideals and the philosophy of his life”.

While remembering the contribution of Raja Ram Mohan Roy the Union Minister said, “On taking his name the image of an independent and visionary thinker who was not only a great social reformer but he was also a great philosopher, an educationist and a great journalist. His scholarly mind can be gauged from the fact that he learned Bengali, Persian, Arabic and Sanskrit languages ​​at the age of 15. Later he also learned Hindi and English. The work he did for education and the improvement of conditions of women is incomparable. On child marriage, he clearly believed that the age of marriage for women should be increased and  women should get the right of remarriage. In true sense he was the architect of Modern India and the father of Bengal Renaissance”.

He added, “Today I appeal to the Authorities of the States and the Union Territories, that the Public Library System should be strengthened more in the “Azadi Ke Amrit Mahotsav”.Active participation in the programs of National Model Library should be ensured and we should also move in the direction of E-Book and digital library. I think only knowledge and skills will make India a strong and a self-reliant nation. We all need to make new resolutions and move in the direction of making this great nation a Vishwaguru once again”.

Several other events were arranged  at  Science City Auditorium, Kolkata. A seminar and quiz program for children were organized. A multimedia presentation on various facets of the life of Shri Raja Ram Mohan Roy was presented too.