Ministry of Electronics & IT Union Minister of State, Rajeev Chandrasekhar shares PM’s Vision of New India with Startups, Entrepreneurs &am

8 Years of PM Narendra Modi has shattered old Narratives about India being a weak and leaky Democracy : Rajeev Chandrasekhar

“You don’t need a famous last name anymore to succeed in India. Hardwork, Grit, Innovation are only determinants of success. This wasn’t the case when I started my entrepreneurial journey. This is New India that Narendra Modi ji is building. Prior to 2014, Entrepreneurship was merely an exception rather than a rule or a norm. There has never been more opportune moment for young Indians to succeed than now. Thanks to the proactive policies of the Narendra Modi Government and the Government of Gujarat” said Union Minister of State, Ministry of Electronics and IT and Skill Development & Entrepreneurship speaking at Gujarat University on the topic ‘New India for Young India : Techade of Opportunities.’ 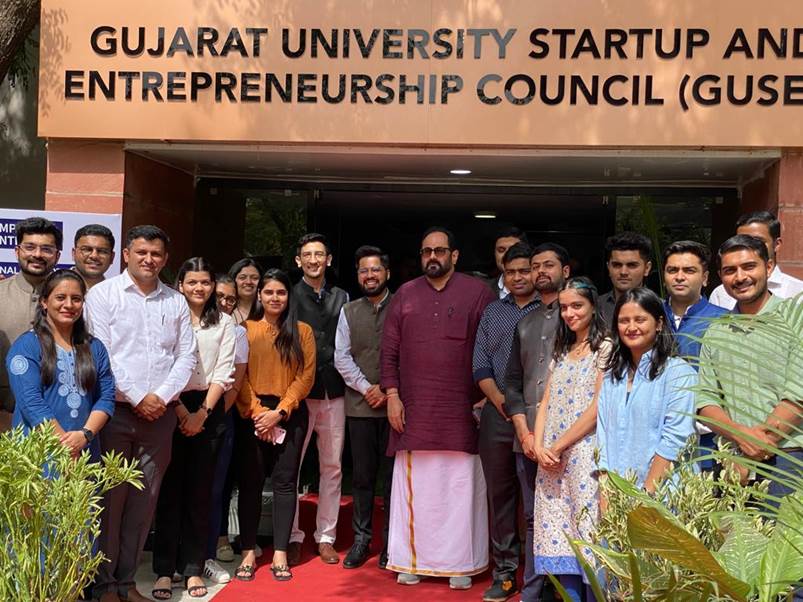 The Minister gave a powerful presentation to a packed auditorium comprising of Young Startups, Entrepreneurs, Students and Faculty of University. The Minister highlighted how 8 years of Modi Government has shattered conventional Narratives about India. “Long back, Indian democracy was associated with corruption and major leakages in the system. There was a PM in the 80’s that gave an infamous statement that out of every 100 paise that are sent from delhi to a beneficiary, only 15 paise actually reaches. Such was the acceptability of the so called weak and leaky system. But now, thanks to the Digital India programme launched by PM Narendra Modi in 2015, every single rupee is directly transferred into the accounts of the beneficiary living in remotest corners of the country. We have turned this narrative of Democracy being weak and leaky on its head” said Rajeev Chandrasekhar

Sharing with young Startups who were inquisitive about Government’s future policy initiatives for Startups, Rajeev Chandrasekhar informed, “Soon Digital India Startup Hub, an institutional framework, shall be established to further promote startup ecosystem & to centrally coordinate startup initiatives at National Level. The Government is making efforts to  connect Startups with Government ecosystem so that Government’s procurement requirements can be met with innovative solutions by Startups.”

The presentation was followed by an engaging Question and answer round where students and Startups posed numerous questions covering topics like blockchain, cryptocurrency, Artificial Intelligence, Machine Learning, Metaverse etc. The Minister answered the questions to their satisfaction & gave newer insights on some upcoming sectors like Drone Technology, Space sector amongst others.

The interaction was very well received by the audience and the Startups and students were impressed with the spectrum of knowledge that the Minister possessed on the subject matter.

Later, The Minister also visited Pandit Deen Dayal Energy University where Startups in the field of energy showcased their innovations.