National Sports University (NSU) will be the platform that will push Manipur into the international sport arena, said Union minister of Culture, Tourism and DoNER G Kishan Reddy, in a speech in Imphal today.

The Union minister reached Imphal on a two-day visit in Manipur today to take part in the Manipur leg of the ongoing Azadi ka Amrit Mahotsav: North East Festival, being celebrated across all the eight northeastern states. The ISTT is a project which was taken up jointly by the Manipur government and Northeastern Council (NEC) at a cost of Rs 12.287 crore.

The Union minister inaugurated the project in the presence of state chief minister N Biren Singh, state works minister Govindas Konthoujam and other dignitaries of the state government and NEC.It was followed by a review meeting on the progress works of the ongoing development of the permanent campus of the National Sports Universiry at Koutruk in Imphal West district with the State Chief Minister, works minister and concerned officials of the NSU.

Later, talking to reporters, Sh. Reddy said that the implementing agency was seeking 30 months to complete the construction of the permanent campus.However, the Centre would like to complete it at the earliest possible time. 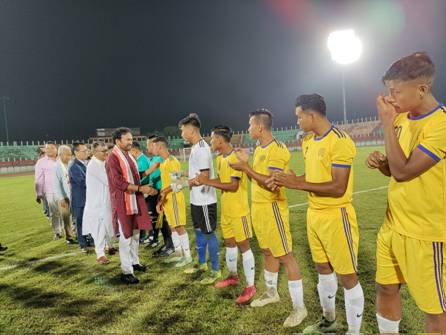 Sh.Reddy then inspected the infrastructures and other facilities being provided in the temporary campus of the NSU at Khuman Lampak Sport Complex.

It was followed by the opening of the final football match of the North East Regional Sports Week being organized as a part of the Azadi ka Amrit Mahotsav: North East Festival at the main stadium of the sport complex.

Addressing the opening function of the match, the Union minister said that on seeing the activities of the NSU, he feels that the country will shine in the world of sports once the university is fully functional.

The Centre had chosen a right place for setting up the university while asserting that it is well known to all that Manipur is the sports power house of India, he added

Once the university is fully functional, Manipur will be the meeting point of not only the country’s sportspersons but also of the globe, he said.

The university will make Manipur the sports hub of not only for the country but also for the globe, he added.

In his speech on the occasion, Manipur chief minister N Biren Singh said that even as the implementing agency sought 30 months to complete the development of the NSU permanent campus, the state would like to complete it before the elections to the Lok Sabha are due by 2024.

Regarding the matter, a joint meeting of all stakeholders will be convened soon, Sh.Singh said, while assuring that his government will try with its best level to complete the permanent campus by 2024. The match was played between Manipur and Tripura.

On the next day of his visit tomorrow, Reddy is scheduled to attend the inauguration function of a badminton tournament at DM College campus in Imphal which is also a part of the ongoing festival.

Before concluding his two-day visit, the Union minister will review tourism projects being implemented at INA complex and Loktak Lake at Moirang of Bishnupur district.

The Azadi ka Amrit Mahotsav: North East Festival being celebrated across all the eight northeastern states is being organized by the Union DoNER ministry with the spirit of “Hum Kisi Se Kam Nahi”.

The country is currently celebrating 75 years of its Independence, her glorious history, people, culture and achievements during the Azadi ka Amrit Mahotsav and DoNER ministry is highlighting the beauty of the northeastern region and its achievements in various fields through this festival.

Similar events, on varied themes, are being held in various capital cities of the eight northeast states under the ongoing festival.