Built at a cost of over Rs 547 crore, all-weather roads measuring up to 526 kilometres is likely to benefit a population of over one lakh 20,000 people: Dr Jitendra Singh

The Minister also reviews the completion work of 22 bridges constructed at a cost of ₹ 29.50 crores and the same will be dedicated to the people soon 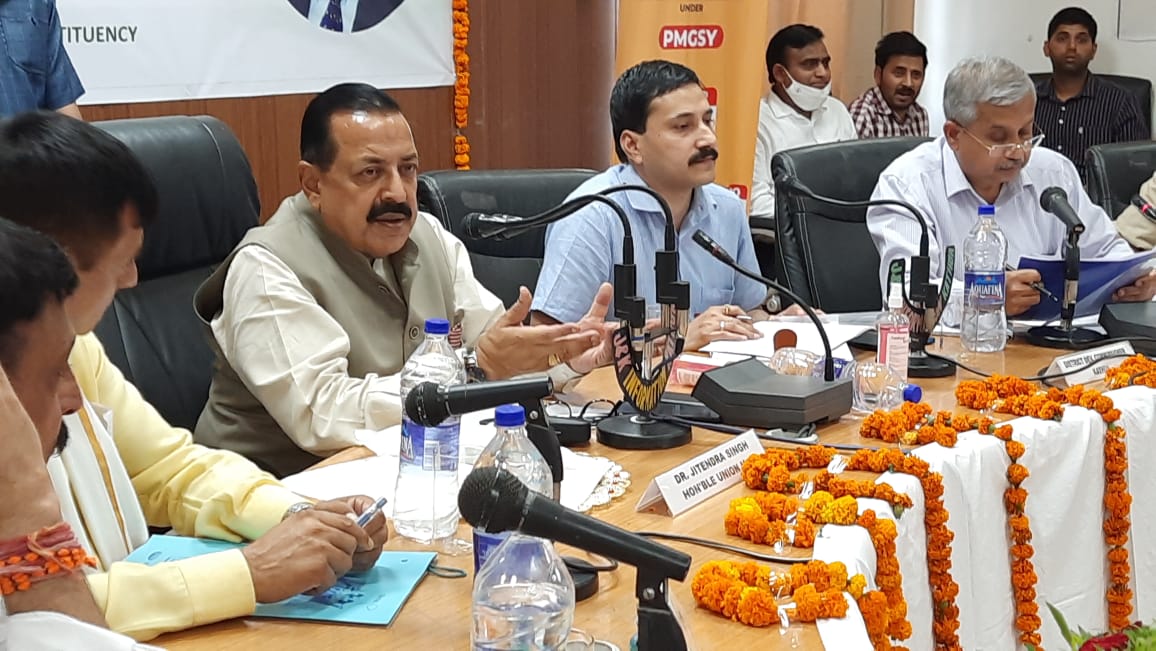 Dr Jitendra Singh informed that built at a cost of over Rs 547 crore, all-weather roads measuring up to 526 kilometres is likely to benefit a population of over one lakh 20,000 people, most of them living in far-flung hilly areas. He said, despite serious challenges posed by the Covid19 pandemic, barring few all the projects were completed within stipulated timeframe. He emphasised that despite challenges posed by pandemic, the country had not compromised with the pace of development and particularly the UT of Jammu and Kashmir.

He said, roads are lifeline of a developing nation which will bring benefits in various sectors like education, health, marketing of agricultural produce and will bring many social benefits as well.

The Minister also reviewed the completion work of 22 bridges constructed at a cost of ₹ 29.50 crores and the same will also be dedicated to the people soon.

Dr Jitendra Singh said in the last 7-8 years of the Modi government, the work culture in the country has undergone a sea change and projects are now being cleared on need-based requirements, rather than on any other considerations. He emphasised that in sanctioning of new road projects, the priority is given to views of Sarpanches and othet local elected representatives rather than to request made by local MPs or MLAs.

Dr Jitendra Singh also informed that his Parliamentary constituency of Udhampur-Kathua-Doda received the highest allocation of PMGSY grant since 2014 in Jammu and Kashmir. He said, out of the Rs 4,175 crore of the PMGSY central funds for new projects, about Rs 3,884 crore have been allocated, which is nearly two-thirds of the funds for the hilly and inhospitable terrain of Udhampur-Kathua-Doda At the review meeting, Dr Jitendra, highlighted the government’s initiatives towards strengthening road connectivity in the UT, and said that it is the firm commitment of present dispensation that every part of the Jammu and Kashmir gets a durable road network for rapid growth and development. He said that the Government was committed to provide the benefit of the schemes like PMAY, PMGSY, and MGNREGA to the people living in the far off panchayats and blocks and other difficult areas of Jammu & Kashmir. He urged the officials of various departments to work in coordination with the PRI members and creating SOPs for better coordination and synergy so that the goal of Inclusive development can be achieved.

It may be recalled that in September, 2020, Dr Jitendra Singh unveiled 23 roads and bridges projects in Kathua, Doda, Udhampur and Reasi districts in the Jammu region. The projects costing about Rs 73 Crore and having length of 111 kilometres benefitted more than 35,000 people in the region. 23 Projects included 15 roads built under PMGSY for all weather connectivity and 8 bridges for better connectivity to the people.