The Portal BioRRAP will cater to all those seeking regulatory approval required for biological research and development activity in the country.

The Minister says, India poised for becoming a Global Bio-manufacturing Hub and will figure among the top 5 countries of the world by 2025

Over 2,700 biotech start-ups and more than 2,500 biotech companies working at present in the country

The contribution of the Indian biotechnology industry in the global biotechnology market to grow to 19% from a mere 3% in 2017 by 2025: Dr Jitendra Singh

The Portal “BioRRAP” will cater to all those seeking regulatory approval for biological research & development activity in the country and thus offer a huge relief for “Ease of Science as well as Ease of Business. 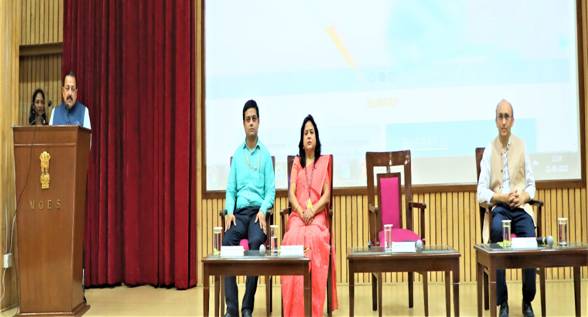 Speaking after the launch of Biological Research Regulatory Approval Portal (BioRRAP), Dr Jitendra Singh said, India is poised to become a Global Bio-manufacturing Hub and will figure among the top 5 countries of the world by 2025.

Dr Jitendra Singh said, the Portal will also allow stakeholders to see the approvals accorded against a particular application through a unique BioRRAP ID. He described this unique portal of DBT as a step towards Ease of Doing Science and Scientific research and Ease of Start-ups in India. The Minister said, Bio-technology has fast emerged as an academic and livelihood avenue for youngsters in India. He also pointed out that there are over 2,700 biotech start-ups and more than 2,500 biotech companies working at present in the country.

Describing the launch of Portal as whole of Govt approach in tune with Prime Minister Modi’s vision, Dr Jitendra Singh said, this portal will strengthen interdepartmental synergies and bring accountability, transparency and efficacy in functioning of agencies regulating various aspect of biological research and issuing permission. Congratulating the Department of Biotechnology for launching of BioRRAP porta, the Minister suggested that the Department should endeavor to evolve further mechanisms to make the procedures simpler and effective. Dr Jitendra Singh pointed out that other than biotechnology, biological work related to biodiversity, latest methods of conservation and protection of flora and fauna, forest and wildlife, bio-survey and bio-utilization of biological resources are also gaining momentum in India due to effect of climate change on them. He added that research in the various biological fields is continuously expanding its vista in India supported by the grants from various public and private sector. Many of these research falls under the purview of one or more regulatory agencies which first approve the research proposal after which researcher undertakes that specific research.

The Minister further added that at present there is no mechanism to track the requisite regulatory approval for a research proposal on a single portal and therefore, to provide more credibility and recognition to such biological researches, Government of India has developed a web system under which each research, requiring regulatory oversight, will be identified by a unique ID called “BioRRAP ID”. He said, the portal will serve as a gateway and will help researcher to see stage of approval of their applications for regulatory clearances and to see preliminary information on all the research work being undertaken by the particular researcher and/or organization.

Dr Jitendra Singh directed the DBT officials for wider publicity of this unique National Portal and asked them to make short duration films capturing all the nuances of the registration and regulatory approval through the portal.

Coming back to India emerging as a Global Bio-manufacturing Hub, Dr Jitendra Singh informed that India is among the top 12 destinations for biotechnology globally and 3rd largest biotechnology destination in the Asia Pacific region. The Minister said that by 2025, the contribution of the Indian biotechnology industry in the global biotechnology market is expected to grow to 19% from a mere 3% in 2017. He also added that the Bio Economy’s contribution to the national GDP has also grown steadily in the past years to 2.7% in 2020 from 1.7% in 2017 and will touch new heights after 25 years of Bio-economy journey in the Centenary year of 2047.

Referring to COVID pandemic, Dr Jitendra Singh lauded the strength of Indian Scientific organization and enterprises and said that our institutions have come out with various vaccines, diagnostics and other tools which helped us to fight with Covid 19 situations. Further, our regulators be it Department of Biotechnology, Indian Council of Medical Research or Central Drugs Standard Control Organization worked tirelessly to streamline the regulatory processes and reducing the timelines for approvals, the Minister added.

The Minister underlined that during pandemic, it was observed that there is need to link the applications submitted to various regulatory agencies for approval so as status of application may be seen at one place. Further, it was also felt that as a country we should have repository of the research works being undertaken by our researchers working in public and private sector. This will not only help us in understanding our scientific strength and expertise but also in formulation of enabling policies to garner the fruits of scientific research.

In his address, Secretary, Department of Biotechnology, Dr Rajesh S Gokhale said that BioRRAP has been developed that generates BioRRAP ID for all the research applications submitted on this portal and using this BioRRAP Id, further submission process to respective regulatory agencies has to be initiated based on the research application. He said, this portal is dedicated only for research related activities and not for product development.