No country will progress without adequate sanitation; AMRUT has been critical in facilitating the journey of Swachhata: Shri Puri

Plumbex India to exhibit products and services related to the plumbing, water and sanitation industry

The Minister for Housing and Urban Affairs & Petroleum and Natural Gas, Shri Hardeep S Puri launched the BHARAT TAP initiative at the ‘Plumbex India’ exhibition, here today. This exhibition is aimed for products and services related to the plumbing, water and sanitation industry. Shri Puri said that this exhibition caters to a fundamental service in the development of the nation – water and sanitation and there is no progress or growth without adequate sanitation, which is foundational in the hierarchy of basic services that citizens expect. He further said that there was a paradigm shift in India’s social development after the Prime Minister announced that Swachhata was the key to India’s development. Not only did he launch the ambitious Swachh Bharat Mission to address open defecation and bring in a behaviour change towards Swachhata, he also conceptualised the Atal Mission for Rejuvenation and Transformation (AMRUT) to provide safe water and sewerage systems for 60% of India’s urban population. Together, these schemes have had a tremendous impact on the sanitation situation in the country, he added. 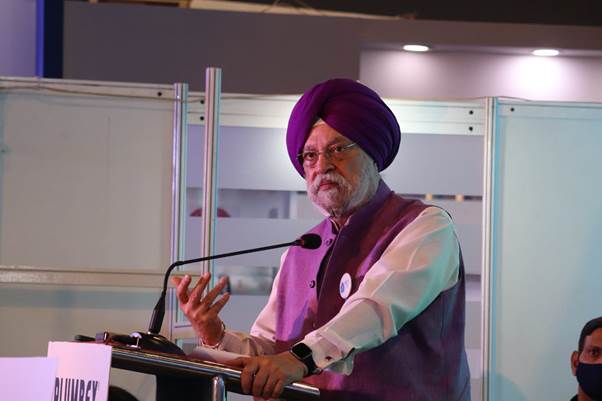 Saying that India went from 38% toilet coverage to 100% toilet coverage in rural areas while also building 73.32 lakh household and community toilets in urban areas, Shri Puri said that the Swachh Bharat Mission became a Jan Andolan that inspired the country towards safe and proper sanitation. AMRUT has been critical in facilitating the journey of Swachhata, the mission has been instrumental in the creation of basic infrastructure – with the major allocation going towards water supply and sewerage/septage, he added.

The Minister said that the outcome has been nothing short of extraordinary and through 1,336 water supply projects worth Rs. 42,224 crores and 860 sewerage and septage management projects worth Rs. 33,840 crores, AMRUT has provided 127 lakh household water tap connections and 95 lakh sewer connections across urban India. Similarly, sewerage projects under AMRUT are expected to lead to a development of approximately 6,000 MLD treatment capacity of STPs with around 2,360 MLD capacity already created and around 3,650 MLD of STPs under progress, he added.

Shri Puri said that after the success of AMRUT, the next target is to cover all the urban local bodies (ULBs) in the country even as continuing to strengthen water and sanitation services in the AMRUT cities. He further said that this was the basis for AMRUT 2.0, which was launched by the Prime Minister on 1 October 2021. AMRUT 2.0, with an outlay of Rs. 2,77,000 crores, has been designed to realise the aspirations of the ‘New Urban India’ by making all our cities ‘Water Secure’. 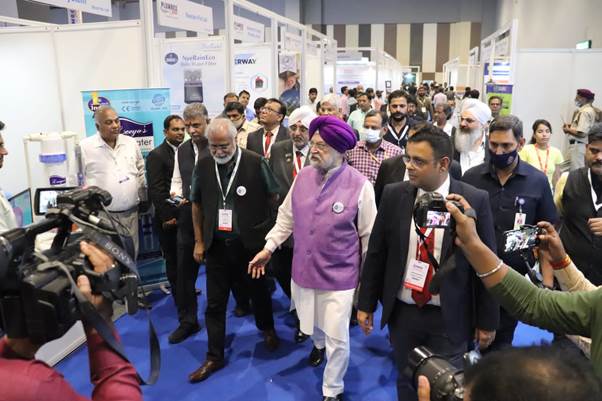 Shri Puri expressed happiness that the states are in the process of proposing projects through State Water Action Plans which has already resulted in the approval of projects worth Rs. 41,500 crores worth of projects. He further said that one major benefit that has emerged from the successful implementation of these mission, in particular, AMRUT, has been that an enormous quantity of pipelines has been laid across the country.

The Minister said that the Plumbing industry is capitalising on the business opportunity while also playing a significant role in supporting the development of sanitation and other basic services in the country. He hoped that BHARAT TAP initiative will provide low-flow, sanitary-ware at scale, and thereby reduce water consumption at source considerably and said that he is confident that this initiative will be accepted quickly in the country and will lead to a renewed focus on water conservation efforts.