Sometime in the future, magnons may replace electrons as carriers of our thoughts and commands more efficiently. Researchers have found ways for broader design and engineering of reconfigurable functional magnonic crystals, which can show the way for magnon based computing systems and bring about a paradigm shift in computing and communication devices.

Electrons, the lightest known particles, almost two thousand times lighter than the proton, are carriers of information in all “electronic” devices. As the electrons drift in the semiconducting device of the CPU, the signal moves almost at the speed of light. However, this drift generates heat in the device, which has to be fanned out of the CPU.

Scientists around the world are thus looking for materials in which magnetic spin waves can be used to transport information without generation of heat. Magnons are particle avatars of spin waves which can ripple through a lattice of tiny ferromagnetic particles of nano dimensions. Since magnons are quasiparticles, their movement through the material does not generate any heat. The promise held by magnons has led to magnonics, a budding research field in nanoscience that deals with the excitation, propagation, control and detection of magnons or spin waves through periodic magnetic media.

Research scientists at the Spintronics & Spin Dynamics Lab at the S.N Bose National Centre for Basic Sciences, an autonomous institute of the Department of Science and Technology, have recently merged magnonics with “Artificial Spin Ice”, creating ways for broader design and engineering of reconfigurable functional magnonic crystals. Artificial spin ice or ASI are metamaterials made up of coupled nanomagnets arranged on different lattices. The tag ‘ice’ comes from the similarity in molecular structure with tetrahedron shaped ice crystals in which two hydrogen atoms are close to the central oxygen atom, and two are far. The spin ice material, too, is made of corner linked tetrahedra. Each vertex of the tetrahedron is a magnetic ion which has a magnetic moment. In their low energy state, they follow a two in–two out arrangement.

Artificial spin ice (ASI) systems replicate the principles of the spin ice systems. According to the scientists, “The successful use of ASI as a functional magnonic crystal will depend upon the efficient reconfigurability of their magnetic microstates and the ensuing spin-wave properties.” This precisely is the crux of their research.

Using an experimental set-up developed in house, the S. N. Bose Centre scientists are studying the samples through Brillouin light scattering (BLS). BLS is an inelastic light scattering phenomenon of light quanta photons from quasiparticles like magnons or phonons, which can help in understanding spin-wave propagation and dispersion under the influence of an external magnetic field. Earlier experiments had mainly used the ferromagnetic resonance technique (FMR), which helped in studying the global or large-scale behaviour of ASI. Hence, the BLS method is a breakaway from the earlier experimental methods. Experimental observations using BLS are consolidated and extrapolated through simulations.

Their studies published in ACS Publications show that the ASI systems can potentially give rise to a huge variety of magnetic microstates, which can be globally or locally controlled by a magnetic field. This would lead to the effective formation of different magnonic crystals by subtle changes in the external magnetic field, more like origami or a kaleidoscope. Therefore, different functions of magnonic circuit components can be performed in the same active element or magnonic crystal only by externally tuning a modest magnetic field, saving huge cost and energy. 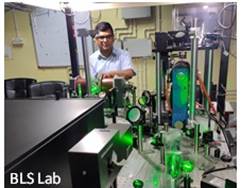 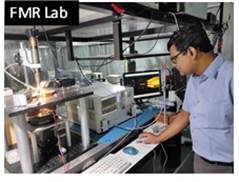 The equipment at the Spintronics & Spin Dynamics Lab of S. N. Bose Centre have been fabricated in house by Prof. Anjan Barman’s team