The first Regional Toys Fair is being organised in Varanasi at Deendayal Hastkala Sankul Trade Facilitation Centre & Museum from 27th –30th   May, 2022 by the office of Development Commissioner Handicrafts, Ministry of Textiles in association with  Export Promotion Council for Handicrafts (EPCH).

The fair was inaugurated by Smt. Mridula Jaiswal, Mayor of Varanasi in the presence of Shri Shantmanu – Development Commissioner (Handicrafts), Ministry of Textiles and Shri R. K. Verma – ED, EPCH.

Smt. Mridula Jaiswal  appreciated the efforts for Regional Toys Fair and suggested to organise such events regularly at Varanasi. Shri Shantmanu, DC Handicrafts said that such initiatives by their department will help in realising the vision of Hon’ble Prime Minister of India to promote ‘Handmade in India’ especially for items such as toys with a thrust on ‘Make in India’ initiative. 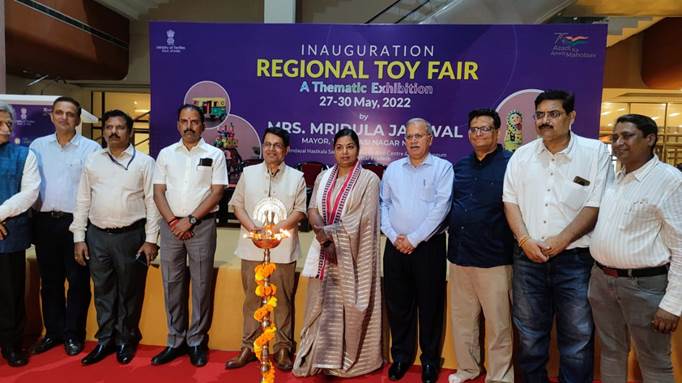 In his address, Dr. Rakesh Kumar, DG EPCH said that around 100 toys exhibitors from 13 states are exhibiting their products and craftsmanship during the three days fair. The Nirmal toys from Telangana, Channapatna and Kinhal Toys toys from Karnataka, wooden toys from Varanasi and Chirakoot, Kathputli craft from Rajasthan, Asharikandi toys from Assam, dolls from Manipur are some of the major attractions for buyers.

The toys play and important role in the cognitive development of children and toy-based pedagogy can be used by parents to make their children learn. Toys help in understanding the cultural heritage of our country, and at the same time, strengthen the psychomotor and emotional development of their personality.

Indian Toys Industry is estimated to be $1.5 bn making up 0.5% of global market share. The toy manufacturers in India are mostly located in NCR, Maharashtra, Karnataka, Tamil Nadu and clusters across central Indian states. The sector is fragmented with 90% of the market being unorganized and 4,000 toy industry units from the MSME sector. The Govt. of India and the entrepreneurs are working closely in the direction to increase India’s export share in global toy business that is worth over US$ 7 trillion informed Dr. Rakesh Kumar.

EPCH is a nodal organisation responsible for promotion of exports of handcrafted products from India to various global destinations and project India’s image abroad as a reliable supplier at competitive prices.