Meet Jeho, the paddler from Mizoram gives a stunning defensive display at KIUG 2021

Ministry of Youth Affairs and Sports Meet Jeho, the paddler from Mizoram gives a stunning defensive display at KIUG 2021 Jeho was the star play

Meet Jeho, the paddler from Mizoram gives a stunning defensive display at KIUG 2021

When paddler JehoHimnakulpuingheta from Mizoram University stepped up against Ansh Sabharwal of Punjabi University, Patiala, at the Khelo India University Games 2021, he was put on the back foot straightaway. The 2020 Khelo India Youth Games Bronze-medal winner, Jeho, went down 0-6 against Ansh, and things looked difficult from there. But showing crafty defensive techniques, Jeho managed to showcase his mental tenacity and went on to win the match in straight games. 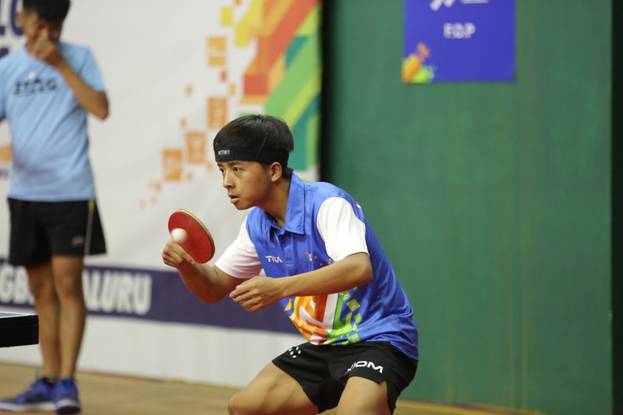 “I am a defender. The defenders have to strategically plan their shots. They have to not give up and keep on fighting till the end, as their role is to tire out their opponents by stretching out long rallies,” Jeho explained after the match.

He was the star player for Mizoram University on Saturday in the Men’s Team Table Tennis event at The Jain Sports School as he picked up wins in both of his matches in straight games in Round 2 match of the Pool Stage against Punjabi University, Patiala. While Mizoram University lost the match 2-3, with Alberto Ruata, and John Khawlhring losing their respective matches, the 18-year-old Jeho left everyone impressed with his quick foot movements and his fast defensive shots. “As defencer, I have to make my opponents play non-stop and that was the strategy that I employed. Because I was constantly defending, it prompts the opponents to go for attacking moves, doing which they get tired and made mistakes. That was my main strategy,” he explained.

The 18-year-old Jeho continued his stunning form in the third Group Game in the evening against SavitribaiPhule Pune University, as he defeated RajatKadam and ShounakShinde, to help Mizoram University pick a 3-2 win and reach the Men’s Team Table Tennis Quarterfinals. Being the only team from Mizoram in Table Tennis, this was a big achievement for the young paddler.

“We did not lose confidence after our defeat against Punjabi University and knew we have to work hard to push for a win. We are glad we won a close contest against SavitribaiPhule Pune University, and I am happy with my performance and the performance of the team,” Jeho said.

Jeho hails from a humble family, in the Lunglei district of Mizoram, and was introduced to Table Tennis by a local coach in his locality. His father, who is currently working as a male nurse in a private hospital, was a football player back in his days, but due to lack of support at the time, he pushed Jeho to pick an individual sport, instead of football, which is the most popular sport in his state.

“Seeing the level of attention athletes are receiving these days, my father pushed me to pursue individual sports,” Jeho recalled.

“I joined TT when I was 9 years, old, as I was introduced to it by a local coach nearby my place. I found the sport quite interesting, and soon I was selected in the Academy, and have been playing ever since,” he further added.

Jeho believes that Table Tennis is not the most popular sport in his state at this point, but he believes that Khelo India Games can open up doors for more players to come up from across disciplines in the state.

“TT is not the most popular sport in Mizoram – football, basketball, and badminton are more popular as of now. We are making big developments in football in the state,” Jeho said.

“But because of Khelo India, things are on the rise in other sports as well. In Youth Games, 2020, athletes from Mizoram won a lot of medals, which inspired a lot of athletes in the state, and I am sure more will start coming up each year now,” Jeho, who had also won the Gold Medal in Men’s Doubles along with Alberto Ruata at the KIYG 2020, added.

Much like every athlete, Jeho, too, has a single-focused dream he is working towards. “Every athlete dreams of playing at the Olympics. I am working hard towards it and will keep moving towards this goal,” he signed off.