The Minister lauds District Administration for achievements in areas like Education, Agriculture and Health

Accordingly, 112 districts were identified across the country for special focus to bring about transformation.

Dr Jitendra Singh said that ADP has emerged as a shining example of competitive & cooperative federalism, where Districts are prodded and encouraged to first catch up with the best district within their state, and subsequently aspire to become one of the best in the country, by competing with and learning from others. He informed that the broad contours of the programme are Convergence (of Central & State Schemes), Collaboration (of Central, State level ‘Prabhari’ Officers & District Collectors), and Competition among districts through monthly delta ranking; all driven by a mass movement.

Regarding the work done in Sitamarhi, Bihar under ADP, Dr Jitendra Singh noted with satisfaction that it has made considerable improvement across various socio-economic indicators and the district is one of the top performers from the State under the Education Scheme. In education, the district has strived to improve the ‘pupil-teacher ratio in elementary schools’ from 16% to 35% in the last 4 years, indicating improvement in governance and capacity building. Sitamarhi is also nearing saturation in indicators related to school infrastructure and it has also initiated innovative best practices such as initiation of Modern Libraries, initiating a mass movement to have wholehearted participation from students, teachers and parents, which can be replicated in other districts.

Dr Jitendra Singh was given a detailed presentation by District Magistrate Sunil Kumar Yadav and apprised him of the progress made in key indicators related to pregnant women health and child nutrition that address issues like MMR and IMR. The district has shown good improvement in indicators such as ‘percentage of institutional deliveries’ ‘percentage of children fully immunized, ‘percentage of underweight children under 6 years. The Minister directed the concerned officers to work with utmost dedication in order to be amongst the top in the ranks of the Programme.

The District Magistrate informed that based on good work done in ‘Agriculture and Water Resources’ on ADP indicators, Sitamarhi has been rewarded with 5 projects with estimated cost 302.69 lakh on 22nd March 2022 that include Establishment of Mushroom Spawn production unit and Establishment of Custom Hiring Centre of Farm Machinery for purpose of Agriculture mechanization in Sitamarhi.

Referring to Prime Minister’s special focus on financial inclusion, Dr Jitendra Singh directed the officials to work hard and strive for saturation in financial inclusion that is ‘number of Jan Dhan accounts opened’ and in Health that is ‘Percentage of children fully immunized (9-11 months). The district also needs to improve the administrative reported data quality, the Minister added. 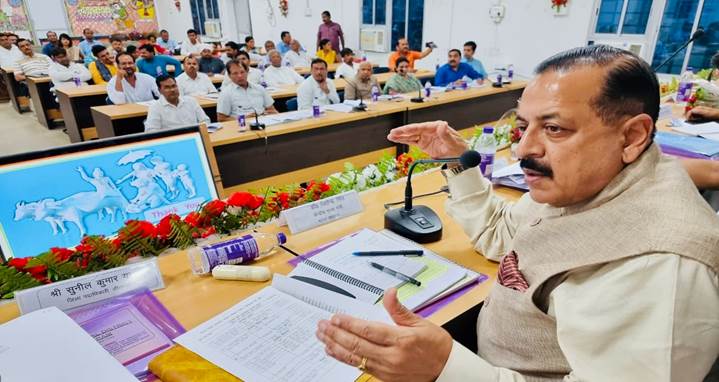 Noteworthy to mention that Centre has directed Union Ministers to visit different aspirational districts for official appraisal of the ground level assessment of the initiative. Launched by the Prime Minister in January 2018, ADP aims to quickly and effectively transform under-developed districts across the country. The broad outline of the programme includes Convergence, Collaboration and Competition among districts through monthly delta ranking, all driven by a mass movement.

With States as the main drivers, this program focuses on the strength of each district, identifying low-hanging fruits for immediate improvement and measuring progress by ranking districts on a monthly basis. The ranking is based on the incremental progress made across 49 Key Performance Indicators (KPIs) under 5 broad socio-economic themes – Health & Nutrition, Education, Agriculture & Water Resources, Financial Inclusion & Skill Development and Infrastructure. The delta-ranking of Aspirational Districts and the performance of all districts is available on the Champions of Change Dashboard.