“Kisan Bhagidari Prathmikta Hamari” Campaign under Azadi Ka Amrit Mahotsav has commenced from 25th April and will be organized till 30thApril, 2022 to create the awareness on various schemes and their benefits for the farming community across the country. Ministry of Agriculture & Farmers welfare through National Bee Board (NBB) has conducted a National Conclave on “Wild and Forest Honey” with collaboration of Tribal Cooperative Marketing Development Federation of India Limited (TRIFED). Sweet Revolution has enabled the tribal beekeepers to fetch a price 1.5 to 2 times more than earlier one. 100 FPOs of Beekeepers/ Honey Producers have been identified by NBB, out of these, 14 FPOs have been allotted to TRIFED which are promoting production of wild honey through its “Van Dhan Programme” being implemented in 27 States and 307 Districts.

Ministry of Agriculture & Farmers Welfare has organized special Campaign through Farm Machinery Training and Testing Institutes at Budhni, Hisar, Anantapur & Biswanath Chariali. In this programme, various agricultural machinery equipments were demonstrated. In addition, there was an interface between Innovators & Industry through webinar at Northern Region Farm Machinery Training and Testing Institute, Hisar (Haryana).

Considering the nutritional aspect, a special programme in the name of Nutri-Cereals has been included in National Food Security Mission to promote the nutri cereal crops. With the initiatives of Govt. of India, the United Nations has declared the year 2023 as the International Year of Millets. In Jute crop, demonstration and farmers training on improved Jute production technology were also organized at West Bengal.

Directorate of Cashewnut and Cocoa Development in association with Keladi Shivappa Nayaka University of Agricultural and Horticultural Sciences, Shimoga   organised a mega Cashew and Cocoa Fair at KNUAHS campus, Navile, Shimoga. The stake holders CAMPCO, Cadbury and development departments participated in the programme. An exhibition was also arranged depicting live products of cashew and cocoa, activities of MIDH etc. 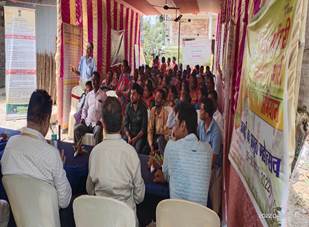 ICAR Institutes have organized various events at more than 70 ICAR Research Institutes which witnessed participation of more than 25,000 farmers & agri-entrepreneurs. Farmers- scientist interaction on Bhartiya Prakritik Krishi Paddhati, Natural & Organic farming, promotion of pulses & oilseeds, promotion of diversification through introduction of high value crops & integration of horticulture, livestock and fish besides bio-fortified crops were organized by various institutes. Besides Kisan melas, farmer scientist interaction, animal health camps, exhibitions and visits to different demonstration units by the farmers were also organized by different institutes. Various events on Millets including farmer- scientist-startup interactions were organized at farm and village locations. The startups shared their entrepreneurial experiences regarding innovative machines developed by his startup and offered them to farmers at economical price. Interactions were also held on the processing and marketing related to millet-based products and the increasing demand from the public in consuming millets to encourage farmers to cultivate millet crops. The ‘Kisan Bhagidari Prathmikta Hamari’ campaign organized by ICAR was successful with participation from farmers, startups, FPO’s and other stakeholders.

Ministry of Rural Development organized a webinar on integrated watershed development, its contribution towards sustainable utilization of natural resources, enhancing livelihood and incomes of farmers and DAY-NRLM organised a lecture and shared the experiences of Agriculture/Animal Husbandry sakhis.