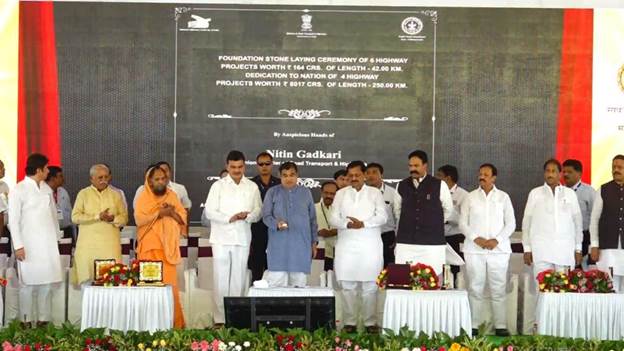 The Minister said these road projects, which have the potential to bring Solapur district and its environs into the mainstream of the country, will be important for the well-being and development of the people of Solapur. He said these projects will help in streamlining the traffic in the city and reducing the incidence of accidents and environmental pollution. It will be easier to connect the rural areas of the district with the city, he added.

Shri Gadkari said strengthening of road network is of great importance for Solapur district which has important temples like Siddheshwar Temple, Akkalkot, Pandharpur. He said built with these factors in mind, these highway projects will facilitate access to spiritual sites in the city and district and will also help in smoothing the transportation of agricultural goods. In order to alleviate the frequent water scarcity in Solapur district the Minister said several lakes have been constructed in Solapur district on the pattern of Buldhana pattern through NHAI since 2016-17. He said many available reservoirs were deepened and the soil and stones obtained from them were used for road construction. He said through this, about 73 villages in Solapur district have come under water. The water level in the area has increased by 6,478 TMC and 561 hectare area has come under irrigation. 2 water supply schemes have benefited from this project and 747 wells in the area have been recharged, he added.