Ministry of Law and Justice

“Our vision in Amrit Kaal should be of such a judicial system in which there is easy justice, speedy justice, and justice for all”: PM

“Government considers the possibilities of technology in the judicial system as an essential part of the Digital India mission”: PM

“It is important to promote local languages in the courts so that people of the country feel connected with the judicial process”: PM

“Harmonious and co-ordinated functioning among the three organs of the State has preserved and strengthened the democratic foundations of this great nation over the last seven decades”: Chief Justice of India

“India has one of the best free legal aid services in the entire world”: Chief Justice of India

“The Conference is reflective of our collective commitment towards the guiding principles of this government – Sabka Saath, Sabka Vikas, Sabka Vishwas, Sabka Prayas”: Kiren Rijiju

Speaking on the occasion, the Prime Minister said “in our country, while the role of the judiciary is that of the guardian of the constitution, the legislature represents the aspirations of the citizens. I believe that this confluence and balance of these two branches of the Constitution will prepare the roadmap for an effective and time bound judicial system in the country.” He said that 75 years of independence have continuously clarified the roles and responsibilities of both the judiciary and the executive. Wherever it is necessary, this relation has evolved continuously to give direction to the country, he said. Calling the Conference a vibrant manifestation of the beauty of the Constitution, the Prime Minister said that he has been coming to the conference for a very long time, first as Chief Minister and now as Prime Minister.

Setting the tone for the conference, the Prime Minister said “In 2047, when the country will complete 100 years of its independence, then what kind of judicial system would we like to see in the country? How do we make our judicial system so capable that it can fulfil the aspirations of India of 2047, these questions should be our priority today”. “Our vision in Amrit Kaal should be of such a judicial system in which there is easy justice, speedy justice, and justice for all”, he added. 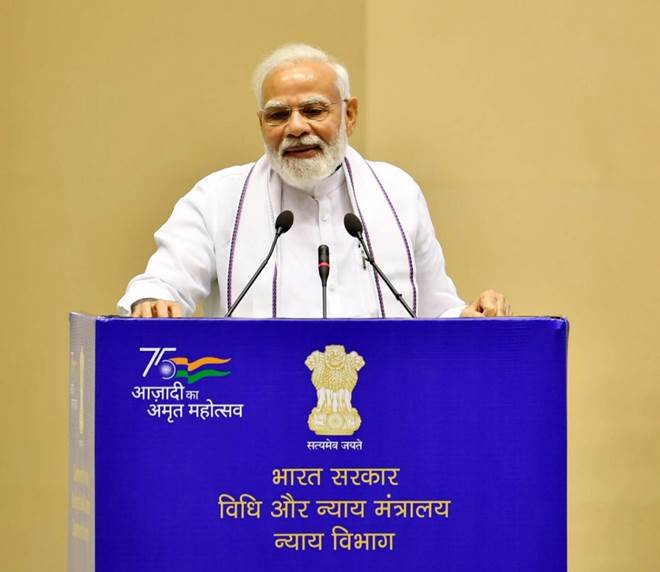 The Prime Minister emphasized that government is working hard to reduce delay in justice delivery and efforts are on for increasing judicial strength and improving judicial infrastructure. He said ICT has been deployed for case management and efforts to fill the vacancies at various levels of judiciary are underway.

The Prime Minister reiterated his vision of use of technology in governance in the context of judicial work. He said that the Government of India considers the possibilities of technology in the judicial system as an essential part of the Digital India mission. He appealed to the Chief Ministers and Chief Justices of High Courts to take this forward. The e-courts project is being implemented today in mission mode, he said. He gave example of success of digital transactions as these becoming common in small towns and even in villages. Out of all the digital transactions that took place in the world last year, 40 percent of the digital transactions took place in India, the Prime Minister informed. Proceeding further on the theme of use of technology, the Prime Minister said that nowadays, subjects like block-chains, electronic discovery, cybersecurity, robotics, AI and bioethics are being taught in law universities in many countries. “It is our responsibility that in our country also legal education should be according to these international standards”, he said. Prime Minister insisted that judicial reform is not merely a policy matter. Human sensitivities are involved and they should be kept in the centre of all the deliberations. Today, there are about 3.5 lakh prisoners in the country who are under-trial and are in jail. Most of these people are from poor or ordinary families, he pointed out. In every district there is a committee headed by the District Judge, so that these cases can be reviewed and Wherever possible, such prisoners may be released on bail. “I would appeal to all Chief Ministers and Chief Justices of High Courts to give priority to these matters on the basis of humanitarian sensibility and law”, he added.

The Prime Minister said mediation is also an important tool for settlement of pending cases in the courts especially at the local level. There is a thousand of years old tradition of settlement of disputes through mediation in our society. Mutual consent and mutual participation, in its own way, is a distinct human concept of justice, he said. With this thinking, said the Prime Minster, the government has introduced the Mediation Bill in the Parliament as an umbrella legislation. “With our rich legal expertise, we can become a global leader in the field of solution by mediation. We can present a model to the whole world”, he said.

Addressing the conference of Chief Ministers and Chief Justices, Chief Justice of India Shri Justice N.V. Ramana said this is an opportunity for us to learn from your rich experience, knowledge, and wisdom that you have acquired in public life. You are the live link with the people. In your own way, each one of you is a great opinion builder. The Constitution provides for separation of powers between the three organs – clearly outlining their sphere of functioning, delineating their powers and responsibilities. It is the harmonious and co-ordinated functioning among the three organs of the State that has preserved and strengthened the democratic foundations of this great nation over the last seven decades, he said. Shri Justice N.V. Ramana said “This conference is an occasion for us to introspect and contemplate solutions. I have been a strong proponent of “Indianization of the Justice Delivery System”. By Indianisation, I mean increasing accessibility by moulding the system to suit the needs and sensibilities of the Indian population. It is a multidimensional concept. It calls for inclusivity, providing access to justice, removal of language barriers, reforms in practice and procedure, development of infrastructure, filling up of vacancies, augmenting the strength of the judiciary and so on”.

“The concept of ‘Access to Justice’ in India is much broader than simply providing lawyers for representation before Courts. I am proud to state that, India has one of the best free legal aid services in the entire world”, added the CJI.

Speaking on the occasion, Union Minister for Law and Justice Shri Kiren Rijiju said that this Joint Conference of Chief Ministers of States and Chief Justices of High Courts is aimed to deliberate on ways to deliver timely, affordable and quality justice to the citizens of this country.  The Minister highlighted that the august gathering is reflective of our collective commitment towards the guiding principles of this government – Sabka Saath, Sabka Vikas, Sabka Vishwas, Sabka Prayas.  This is a unique opportunity for an honest and constructive dialogue between the government and judiciary on finding concrete solutions for efficient delivery of justice, the minister emphasized.

Shri Rijiju informed that the Centrally Sponsored Scheme for development of Infrastructure Facilities for Judiciary has been extended till 2025-26 with a budgetary outlay of Rs. 9,000 crores including the central share of Rs. 5,307 crores. 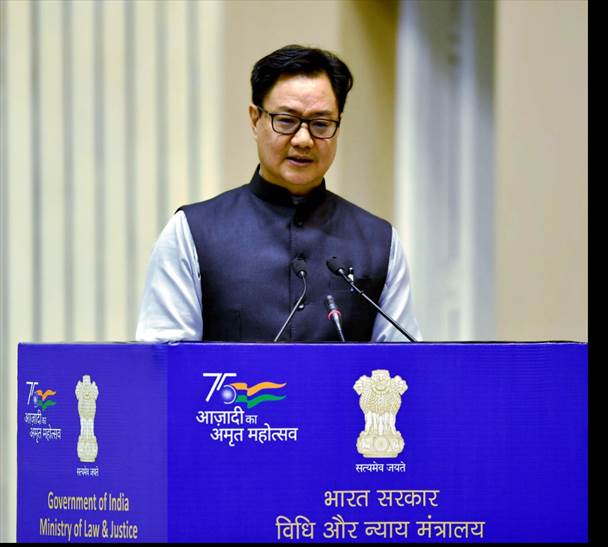 Under the e-court Integrated Mission Mode Project 18,735 courts, across the country have been computerized to keep justice system accessible to common man through e-filing of cases and hearing through video conferencing, the minister said. The Supreme Court has emerged as a global leader with over 2 lakh virtual hearing. The High courts and District courts together have conducted nearly 1.84 crore virtual hearings, he added.

Another significant contribution under the e-court project is National Judicial data grid (NJDG) through which lawyers and litigants can access case status information of over 20.23 crore cases and 17.22 crore orders/judgements pertaining to these courts. The data is uploaded on a real time basis by the connected courts, the minister said.

Yet another landmark achievement of the e-Courts Project in the country is the setting up of Virtual Courts.  There are 17 virtual courts functioning in 13 States/UTs which primarily deal with petty traffic offences.  These courts have covered nearly 1.39 crore cases and realized Rs.236.88 crore as online fines (as on 1stApril 2022).  Besides being environmentally friendly as cases are adjudicated in a paperless manner, it has led to saving of judicial manpower and added to the convenience of citizens, the Minister informed.

The Minister informed that Department of Justice is entering into an agreement with NALSA to facilitate expansion of Tele-Law services through trained lawyers in every district of the country and requested the States and UTs to extend their whole-hearted support in reaching the unreached.