Mumbai is often described as the City of Dreams because of its association with Bollywood and the glamour that comes along with it. In terms of sport, cricket has been linked with the city as well because of legends such as Sunil Gavaskar and Sachin Tendulkar. But at the Khelo India University Games 2021 in Jain University, Bengaluru, Karnataka, Mumbai became the talk of the town at the Mallakhamb arena as the athletes from the University of Mumbai left everyone stunned with their sensational performances. 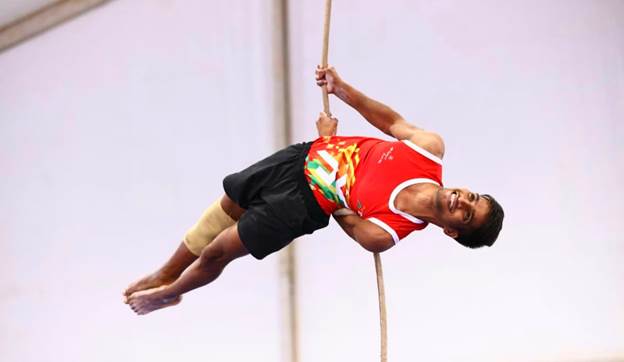 World Champion Deepak Shinde participated in the Boys All-Around Individual Championship Mallakhamb event on Monday, as his teammates from the University of Mumbai cheered on from the sidelines. Deepak scored a total of 27.30 with scores of 9.6 in Pole, 8.7 in Rope, and 9 in Hanging, emerging as the top player of the day.

The 25-year-old M.Com student, after his stellar performance, said, “Today, my parents must be really happy. They are continuously calling me to check my scores. They have always supported me in pursuing the sport, despite the challenges.”

Mallakhamb has an intrinsic link with the city of Mumbai. As per evidence suggested by historical texts and ancient artifacts, Balambhatta Dada Deodhar, the fitness and sports instructor of Maratha king Peshwa Bajirao II revived the art form in the 1800s as a training method for the Peshwa’s army. There have also been historical evidence to support that Maratha empire figures like Lakshmibai, Nana Saheb, and Tantia Tope practiced Mallakhamb as well.

“To keep the traditions of the emperors alive, Maharashtra adopted Mallakhamb into a sport, with Sivaji Park becoming the hub in Mumbai City for the athletes. But now, as the sport is starting to gain traction, Mallakhamb has spread across all regions in Mumbai – such as Chembur, Santa Cruz, Andheri, or Kandivali – with some of the best athletes emerging from the state,” Deepak, who himself hails from Kandivali, explained.

A further boost was given to the indigenous sport when the first-ever Mallakhamb World Championship was held in Mumbai in 2019, with 17 nations coming to participate in the sport. Recalling the event, Deepak said he was pleased to see the level of competition from overseas.

“There were athletes not just from Asian countries but also from European nations at the World Championships. Some nations gave us good competition, including Italy and Japan, which was great to see as it indicates that the sport is spreading across the world.”

“I felt a great sense of pride when PM Modi Ji spoke about Mallakhamb on Mann Ki Baat and talked about the Government of India’s aid to the USA and Japan regarding Mallakhamb equipment. Such support from PM Modi, Mallakhmab Federation of India, and Union Ministry of Sports and Youth Affairs has helped in the sport gaining Universal recognition,” he added.

Members of Deepak’s University team believe that at the speed at which the sport is growing, it will soon be spread across all the 28 states in the country.

“Earlier, there used to be 3-4 clubs in Mumbai, but now there are at least 30-40 Mallakhamb clubs. Also, during the summer vacations, the maximum number of kids are joining Mallakhamb, and not cricket or football across several Universities. There are international-level coaches in the city who are providing exceptional training. You can clearly see the shift in trends,” Abhishek Prasad, a 21-year-old Business of Management Studies student from the University of Mumbai said.

‘Through Khelo India, you now see us Live on TV’

Deepak, who hails from a humble family, was inspired by his brother to pursue the sport. Now, both brothers are running a coaching and fitness center where they provide training to up-and-coming athletes to provide for their families. While Deepak is still looking for a job to lead a well-settled life, he believes the work done by the Government of India has glamourised the sport which has increased opportunities for the current and rising Mallakhamb athletes to earn a living.

“Amul India recently featured me in a Chhaas advertisement. For the first time, a Mallakhamb World Champion was featured on such a big brand. So, the development is happening at such a level that big brands are starting to associate with the sport,” Deepak said.

“If and when more brands such as ONGC or Indian Oil or TATA will get involved in this sport, the more money will be invested into the sport. Because of Khelo India University Games, you can see us live today on National TV. It only increases the level of competition. The players get glamour and a chance to be on TV and get news coverage highlights. So, such initiatives will further enhance the popularity of the sport across the country and the world,” Deepak signed off.

The second edition of the Khelo India University Games hosted in Bengaluru with Jain Deemed-to-be University as the host University for the Games. The competition, which is being organized by the Government of Karnataka, along with the Ministry of Youth Affairs and Sports, Government of India, will continue till 3rd May 2022.

KIUG 2021 will witness 4000 participants from around 180 battle it out across 20 disciplines, which include indigenous sports like Mallakhamba and yogasana. A first-of-its-kind mobile application has also been developed for the Games which will facilitate the participants during their time in the tournament. The Khelo India University Games aims to provide a platform for University students to showcase their talent and catch the eyeballs of the national team selectors for various sports.