In the presence of the Union Home Minister Shri Amit Shah, India created the Guinness Book of World Records when 78 thousand 220 tricolors were waved simultaneously

In the presence of Union Home Minister Shri Amit Shah, India has created the record in waving the National Flag at the same time. On 23 April 2022, India entered the Guinness Book of World Records by waving 78,220 tricolor flags simultaneously at the “Veer Kunwar Singh Vijayotsav” programme at  Duler Ground in Jagdishpur, Bhojpur, Bihar. 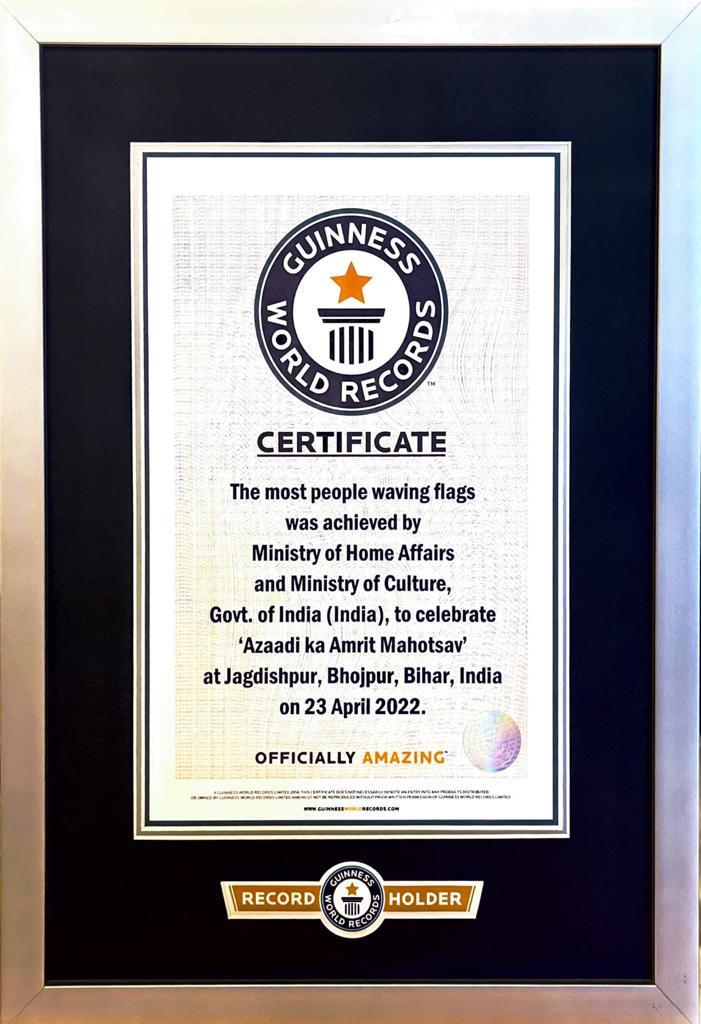 The occasion was a tribute to the glorious victory of the then King  of Jagdishpur, Veer Kunwar Singh, who is considered one of the ‘heroes’ of the freedom struggle of 1857. The event was organized by the Ministry of Home Affairs and Ministry of Culture under the ‘Azadi Ka Amrit Mahotsav’, the 75th anniversary of India’s Independence.

The attempt was witnessed by representatives of the Guinness Book of World Records and attendees were asked to wear bands for the physical identification. The complete event is documented in video form.

In his address, the Union Home Minister said that Prime Minister Shri Narendra Modi has envisioned that in 2047, India should lead globally and this can be our true tribute to all brave freedom fighters like Veer Kunwar Singh.  Babu Kunwar Singh was also a great social reformer and he had placed the idea of ​​welfare of the backward and downtrodden before the nation at that time. History has been unjust to Babu Kunwar Singh, as he was not given the place he deserved, based on his valour, merit and sacrifice. However, today the people of Bihar have paid their tribute to Babu ji and have once again immortalized Veer Kunwar Singh’s name in history.

Babu Veer Kunwar Singh emerged as a prominent leader of the Indian freedom struggle of 1857, who even at the age of about 80, fought bravely against the British colonial rule. He belonged to the Ujjayini dynasty of the Parmar Rajputs of Jagdishpur, a part of present-day Bhojpur district, Bihar, India.

At the age of 80, he led a selected band of armed soldiers against troops under the command of the British East India Company.. He was the significant‘hero’ of the freedom struggle in Bihar against British colonial rule. He is popularly known as Veer Kunwar Singh.

Union Ministers Shri RK Singh, Shri Ashwini Choubey and Shri Nityanand Rai were present during this historic program in the presence of Union Home Minister Shri Amit Shah. Apart from these, Deputy Chief Minister Tarkishore Prasad and Renu Devi were also present. Together with thousands of people gathered, they raised the tricolor for five minutes and sang the national song ‘Vande Mataram’.