DRI crackdown on drug smuggling syndicates results in seizure of more than 3,300 kg of Heroin, 320 kg of Cocaine and 230 kg of Hashish between January and December 2021

Acting on intelligence jointly developed by DRI and ATS Gujarat, a container is being examined by DRI at Pipavav port, Gujarat in the presence of officers of ATS, Gujarat. The said container having gross weight of 9,760 kg was declared to contain ‘thread’. On a detailed examination on 28.04.2022, out of 100 jumbo bags, four suspicious bags having a total weight of 395 kg, containing threads showed the presence of opiate derivative/Heroin in the field testing done by the regional Forensic Science Laboratory. Bales of thread soaked in Heroin, recovered at Pipavav Port.

It appeared that the drug syndicate used this unique modus operandi in which threads were soaked in a solution containing narcotic drug – heroin which were then dried, made into bales and packed in bags. These bags were shipped along with other bags having bales of normal threads so that it would go unnoticed by the authorities. The modus operandi in this case would have required the extraction of Heroin mixed in the threads. Examination and seizure proceedings by DRI under the provisions of the NDPS Act, 1985 are continuing.

The year 2021 has witnessed substantial seizures of drugs like Heroin, Cocaine, Hashish and psychotropic substances and precursors like Methamphetamine and Pseudoephedrine by the DRI. More than 3,300 kg of Heroin, 320 kg of Cocaine and 230 kg of Hashish were seized between January and December 2021. In addition, 170 kg of Pseudoephedrine and 67 kg of Methamphetamine were seized during this period. Methamphetamine tablets recovered from fuel tank of a vehicle 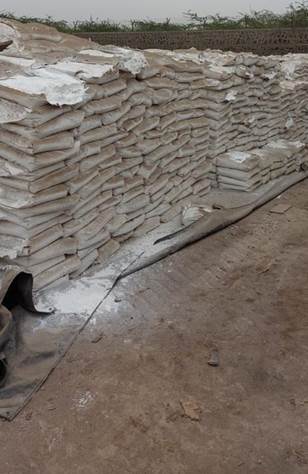 Syndicates have also tried to push narcotics like Yaba and Heroin from the Indo-Myanmar border and Hashish from the Indo-Nepal border, into India through the land borders. DRI officers have also intercepted such consignments from these borders, sometimes ingeniously concealed inside vehicles. DRI in one instance in February, 2022 seized one Lakh Yaba (Methamphetamine) tablets and affected multiple seizures of Heroin in North-East India, smuggled into India from Myanmar.

With easing of restrictions and opening of International Air travel after the restrictions imposed due to the Covid-19 pandemic were lifted, the numbers of air passengers arriving into India have increased. In the last two months, DRI has booked multiple cases of seizure of Heroin concealed in baggage and in the form of pills swallowed by body carriers. In one such major case, DRI seized 16 kg of Heroin in March 2022 concealed in the baggage of three passengers, who had arrived at Kolkata airport.

Multiple cases including seizure of 4.4 kg, 5.9 kg and 8.4 kg of Heroin in three separate seizures at Ahmedabad, seizure of 2.2 kg, 1.7 kg and 2.25 kg Heroin in the form of ingested capsules in three different seizures at New Delhi, seizure of 3.2 kg Heroin at Hyderabad and seizure of 4 kg and 7.9 kg Heroin in two different cases at Chennai have been affected by the DRI in the recent past. In the last two months, DRI has also booked three cases involving seizure of 3.7 kg of Cocaine in the form of ingested capsules from passengers arriving into India. Apart from these, a number of cases have been booked by the Airport Customs based on specific inputs provided by the DRI including seizure of about 17.90 Kg Heroin at IGI Airport on 10.04.2022 which was being carried by a serving officer of the Kenyan administration. Ingested Heroin recovered from the passengers at the Airport

Air passengers have increasingly tried different ways and means to deceive DRI officers, including laminating the Heroin finely into their baggage which are almost invisible to the naked eye. Ingenious concealment methods like use of shampoos and food items to conceal the Heroin have also been observed. The most challenging cases are the ones where Air passengers are used as the body carriers, who ingest laminated pills of contraband, to smuggle them into India which not only require high level of intelligence work to precisely identify such carriers, but partly due to the inherent risks to the life of the carrier.