Scientists have found that populations of insects that experience chronic larval crowding all evolve to give rise to larger and faster hatching eggs, even though they vary in other adaptations.

Till around 2003 it was believed that fruit flies adapted to larval crowding evolved greater competitive ability, invariably through the evolution of a combination of higher larval feeding rate and greater pre-adult tolerance to toxic levels of metabolic waste products like ammonia and urea.

In a paradigm shift of this understanding, previous studies by researchers from Jawaharlal Nehru Advanced Centre for Research (JNCASR), an autonomous institution of the Department of Science and Technology (DST), over the last 15 years revealed that the kind of traits that evolved depended not just on overall larval density, but rather on the specific combination of food amount and egg number at which chronic crowding was experienced.

Now, in a recent study published in the Journal of Genetics, this group of researchers has shown that one particular adaptation– larger and faster hatching eggs—is common for all fruit fly populations exposed to crowding, irrespective of their exposure to different combinations of food amount and egg number.

The team, which is a world leader in understanding the evolution and ecology of competitive ability in fruit flies, showed that three separate sets of fruit fly (Drosophila melanogaster) populations, which experienced chronic larval crowding in slightly different ecological contexts, and had consequently evolved differing adaptations to crowding, nevertheless shared a common evolved adaptation. They all produced larger and faster hatching eggs than their common ancestral control populations.

For this study, the scientists used unique populations developed by the researchers through selection in the laboratory — populations that are not available anywhere else in the world.

Hypothesizing that one way of getting an advantage in competition for scarce larval food could be to hatch from eggs earlier than others and start feeding, S Venkitachalam, S Das, A Deep, and A Joshi investigated whether such a ‘head-start’ mechanism had evolved in any of their crowding adapted populations, in addition to other adaptations that they had observed. They found that all of them had evolved larger and faster hatching eggs, even though they differed in other adaptations to crowding. This suggests that the head-start attained by larvae due to hatching quickly, and at a larger size, is adaptive under a variety of crowded conditions, unlike several other traits.

The study is part of a series of studies on the same populations that has led to a paradigm shift in the understanding of density-dependent selection and adaptation to crowding in fruitflies. 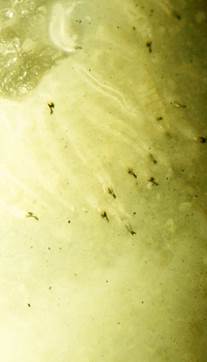