As part of ‘Azadi Ka Amrit Mahotsav’ – to celebrate 75 years of India’s Independence, Rural Electrification Corporation Limited, a public infrastructure finance company under the Ministry of Power organized a ‘Bijli Utsav’ in the states of Manipur, Odisha and Chattisgarh. The date of the event was specifically chosen as 28th April 2022 since it marks the four years anniversary of successfully providing access to electricity infrastructure to all villages under the Deen Dayal Upadhyaya Gram Jyoti Yojana (DDUGJY). As a mark of the occasion, Leisang Village of Manipur was one of the villages where the event was held since it was the last village to be connected to the grid under the DDUGJY Scheme on 28th April 2018. The village electrification drive of the country was also recognized as one of the greatest success stories by the International Energy Agency. 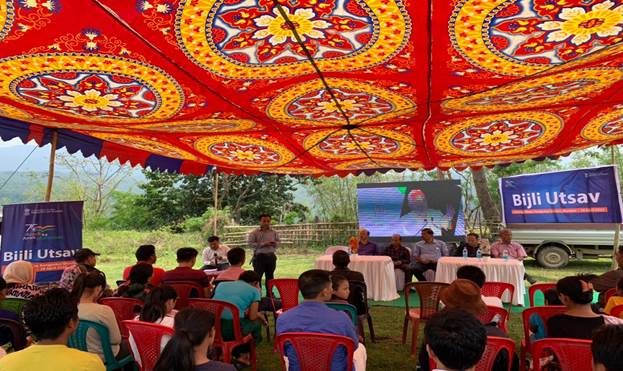 Numerous dignitaries graced the occasion, which saw large turnouts of crowds from nearby villages and districts. The dignitaries highlighted the benefits of electricity, the challenges faced during electrification in rural areas and how the quality of life improved with access to power. The events also witnessed several beneficiaries of the DDUGJY Scheme who were invited on stage to share their experience.

To engage with the villagers, various cultural programmes such as dance and Lok Gayan were held to spread awareness about the usage of electricity, billing, energy efficiency etc. and a quiz on various Government programmes was also conducted to impart knowledge to the public. The event concluded with the distribution of LED bulbs as prizes to the winners of the competitions.

Given the large gathering, it was ensured that all Covid safety protocols such as social distancing and wearing of masks were adhered to. In addition, masks were also distributed to all the attendees.