Briefing about the Aroma Mission launched by the Union Ministry of Science & Technology through the Council of Scientific & Industrial Research (CSIR), which has led to the well-known “Purple Revolution” in India , the Minister informed that the CSIR had, to begin with introduced high-value essential oil bearing lavender crop through its Jammu based laboratory, Indian Institute of Integrative Medicines (IIIM) for cultivation in districts Doda, Kishtwar, Rajouri and later also in the other districts including Ramban, Pulwama, etc. In a brief span of time, aroma/lavender cultivation has become a popular option in farming for agricultural Start-up, he said. 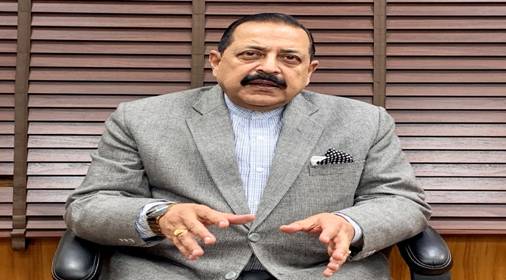 Sharing a lesser known fact, Dr Jitendra Singh disclosed that a youth called Bharat Bhushan hailing from remote village Khillani in district Doda has become a role model success story. Bhushan started lavender cultivation in just about 0.1 hectare of land with the support of CSIR-IIIM but as profits started showing, he converted a larger area of maize plantation around his house also into lavender plantation. Today, he has 20 others working on his lavender fields and Nursery while around 500 farmers from his district have also followed him by switching over from maize to perennial flowering lavender plant, he said.

Dr Jitendra Singh said, unfortunately it was never reported in the local media that IIIM Jammu was helping the Start-ups in aroma and lavender farming to sell their produce. Prominent companies like Mumbai based Ajmal Biotech Private Limited, Aditi International and NavnaitriGamika, etc., are the primary buyers.

In commemoration of AzadikaAmritMahotsav, Dr Jitendra Singh announced that CSIR has launched Phase-II of Aroma Mission after the completion of Phase-I. In addition to IIIM, CSIR-IHBT, CSIR-CIMAP, CSIR-NBRI and CSIR-NEIST are also now participating in the Aroma Mission,

Pertinent to mention that Aroma Mission is attracting Start-ups and agriculturists from across the country, and during Phase-I CSIR helped cultivation on 6000 hectares of land and covered 46 Aspirational districts across the country. More than 44,000 persons have been trained and several crores of farmers’ revenue generated. In the second Phase of Aroma Mission, it is proposed to engage over 45,000 skilled human resources with the aim of benefitting more than 75,000 farming families across the country.