Domain experts and students from India and the USA discussed issues ranging from characterizing the space radiation environment to astrobiology and the application of artificial intelligence and machine learning tools in it at the Indo-US Workshop on “Space Radiation Workshop: Radiation Characterization from Sun to Earth, Moon, Mars and Beyond” held from 24 – 28 January 2022.

Shri Kiran Kumar, former chairman, ISRO, gave an overview of previous space missions by India and chalked a roadmap of new missions till 2025 in his keynote address on Jan 26, 2022. He highlighted how ISRO started with humble beginnings with limited resources and talked about some of the notable space missions by ISRO.

He said that Chandrayaan 1 was a significant mission for ISRO, and it changed the perception of the Moon for us, including discovery of OH and water molecules on the Moon. “Mars Orbiter Mission has completed 7 years studying Mars. AstroSat mission is the first dedicated astronomical observatory that India has put in orbit. It is a large collaboration between many national institutes and has provided data for a large number of important studies in astronomical research. Chandrayaan 2 orbiter is healthy, and all payloads are operational. The spacecraft can remain functional for many more years. The data obtained till now has already resulted in many publications,” he added. He also pointed out that the making of the satellite for the Aditya-L1 mission, which will study the sun, is nearing its completion and will likely be launched this year. He also said that in future, ISRO and the Japan Aerospace Exploration Agency (JAXA) will be collaborating on a lunar exploration mission.

The workshop was supported by the Indo-US Science and Technology Forum and hosted by the Aryabhatta Research Institute for Observational Sciences (ARIES), Nainital, an autonomous institute under the Department of Science & Technology, Govt. of India) and Indian Institute of Science Education and Research (IISER), Pune. It is a part of the activities commemorating “75 years of India’s Independence: Azadi ka Amrit Mahotsav” at ARIES.

The 5-day workshop had a theme for each day – Earth, Air, and Spaceflight, Exploration, Space Radiation & Biology, Space Situational Awareness & Opportunities. It included a wide variety of talks in the areas such as cosmic rays, solar monitoring, space exploration, space weather and its effects on satellites and astronauts, astrobiology, balloon-based studies by experts working in the respective areas. Hands-on sessions on application of artificial intelligence and machine learning tools in these areas, which are useful in modern data analyses and modelling techniques, were also organised. The workshop also included a US-India space exploration dialogue session involving eminent scientists from India and the USA. 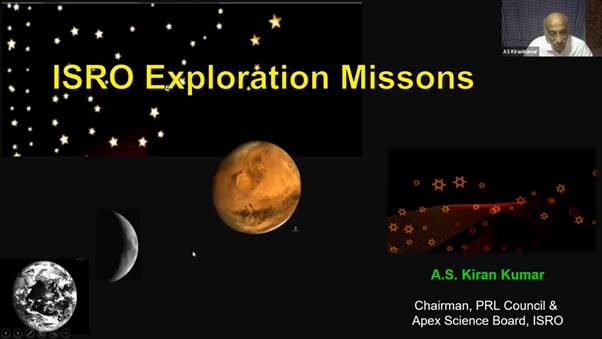 Distribution of Indian participants in the workshop 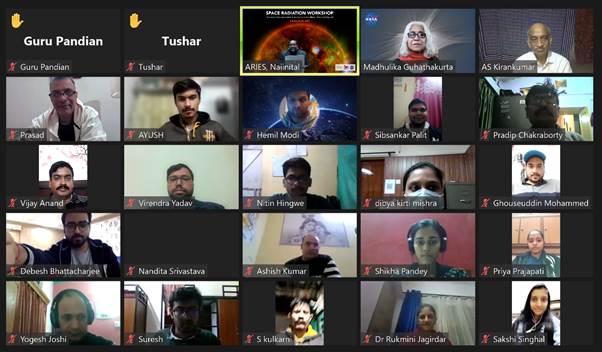 Group photo during the keynote address by Shri A. S. Kiran Kumar