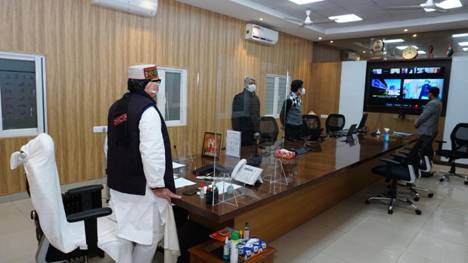 Dr. Pandey also inaugurated an exhibition on ‘Products Developed under Aatmanirbhar Bharat’ organised at BHEL’s Hyderabad unit. In addition, an audio-visual presentation was made on the ‘Unsung Heroes of the Indian Freedom Struggle’ belonging to the Telangana Region. BHEL employees joined the program virtually from multiple locations across the country. While participants logged-in to the online event in large numbers, the event was also webcast live where scores of employees watched the proceedings through the broadcast mode. 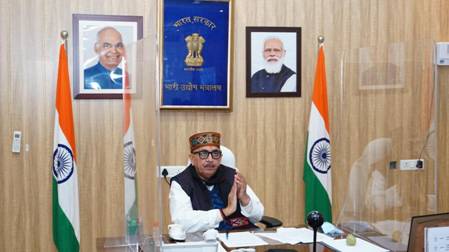 The Minister said being the largest engineering and manufacturing enterprise, the role of BHEL in fulfilling the vision of the Government is very important.  Dr. Pandey emphasised that BHEL will have to play an important role in building an Atmanirbhar Bharat to meet India’s climate commitments, as announced by  the Prime Minister in the recently concluded COP26 meeting.

Dr. Nalin Shinghal, CMD, BHEL, while enumerating the initiatives undertaken by BHEL during the ‘AKAM Iconic Week’ celebrations, thanked the Ministry of Heavy Industries and the Government for supporting BHEL on a sustained basis. Addressing the participants, he said that R&D has always been one of BHEL’s core strengths and BHEL is focussed on playing a leadership role on the path to achieving the Hon’ble Prime Minister’s ‘Panchamrit’ vision @ the United Nations Climate Change Conference (COP26).

Notably, the 0.25 TPD capacity CTM pilot plant, indigenously designed, developed and installed by BHEL, is currently producing methanol with purity of more than 99% from high ash Indian coals. Significantly, this conversion of high ash Indian coals to methanol through the gasification route, is the first of its kind technology demonstration in India.

Loading...
Newer Post
ECI extends ban on physical rallies and roadshows until 22 January, 2022
Older Post
Union Minister Dr Jitendra Singh says, India’s @2047 would have evolved beyond imagination; Not only are things moving fast, but the pace of this forward movement is much faster than ever before, which makes it very difficult to precisely visualise the exact shape of India that emerges 25 years from now
DGGI Gurugram officials bust nexus of 93 fake firms issuing fake input tax credit invoices of Rs 491 crore, arrest one