Poultry – A boon to sustainable living implemented by NERCRMS – A registered society under the aegis of NEC, Ministry of DoNER

Poultry – A boon to sustainable living implemented by NERCRMS – A registered society under the aegis of NEC, Ministry of DoNER

Mr. Minthang resides in Samulamlan Block, Churachandpur district, Manipur. Prior to NERCRMS intervention through NERCORM Phase – III Project, he worked on hourly basis and earned a meagre income.  Due to non-availability of regular work, he could barely support his family’s basic necessities.Owing to the circumstances; he could not provide quality education to his children. 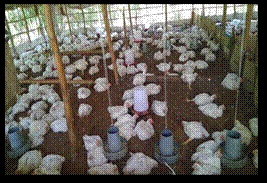 When NERCRMS intervened in the villagein the year 2015-16, Mr. Minthang received Poultry as an income generating activity. The poultry venture gave him an opportunity to increase the annual income of his family. Initially, when he received the project funding, he started his poultry farm with 215 birds. After 45 days of farm maturity, he sold the farm products and earned a profit of Rs. 15,000/- (Rupees Fifteen Thousand) only.

Later, he invested a part of his earnings to expand his poultry business and increased the number of fowls from 1500 to 3000. Over the years, he built two houses that could accommodate 1500 chickens each.