Over 120 participants attended the webinar

Registration fees with WDRA substantially reduced to Rs. 500 for FPOs/PACS/SHGs as compared to Rs. 5000 to Rs. 30,000/- for other conventional warehouses

The Department of Food and Public Distribution (DFPD) is celebrating the iconic week of Azadi Ka Amrit Mahostav, to commemorate the 75th Anniversary of India’s Independence. As a part of the celebration, a webinar was organized here today by Warehousing Development and Regularoty Authority (WDRA) with representatives of Farmer Producers Organisation (FPOs)/Primary Agriculture Cooperative Societies (PACS), NABARD and SFAC.

Over 120 participants from different states participated in the webinar.

Shri. Harpreet Singh, Chairperson inaugurated the webinar with his address to the participants from the PACS/FPOs from the different states. He emphasized the importance and natural advantage of the PACS/FPOs in providing warehousing facilities at the farm gate. He suggested a business model for PACS/ FPOs by providing composite services of aggregation, sorting/grading, assistance in providing pledge finance through financial institutions and sale at appropriate times as a collective lot to get the best process and thereby increasing the income of the farmers. PACS/FPOs can hire unutilized warehouses in their localities in case they don’t own warehouses and upgrade them to WDRA standards to extend benefits to the farmers. WDRA has given a detailed presentation on process of registration with WDRA, concessions and Electronic Negotiable Warehouse Receipt (e-NWR) benefits extended to the PACS/FPOs. It is informed that registration fees is substantially reduced to Rs. 500 for FPOs/PACS/SHGs as compared to Rs. 5000 to Rs. 30,000/- for other conventional warehouses along with reduction in other charges.

A short film on development of warehousing sector and benefits of e-NWR was launched. A presentation regarding repository eco-system was made by M/s NERL.

Shri. Jainendra Aloria, NABARD has given an extensive presentation on different Central Government schemes for promoting PACS and FPOs.  He explained about various subsidies and assistances provided for construction of Warehouses by NABARD. 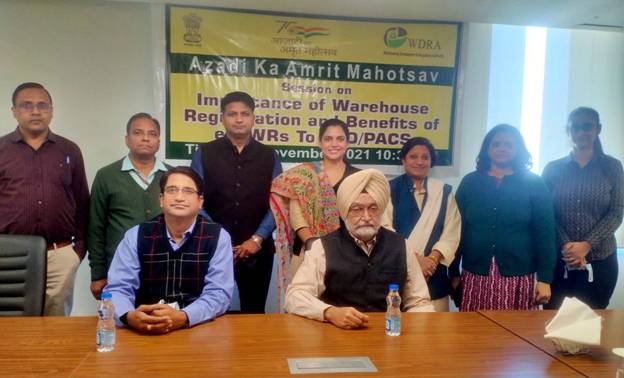