30 Members Cities From Across The Country Sign The Alliance

Union Minister for Jal Shakti Shri Gajendra Singh Shekhawat launched the River Cities Alliance, a dedicated platform for river cities in India to ideate, discuss and exchange information for sustainable management of urban rivers, here today. Thisfirst of its kind Alliance in the world symbolizes the successful partnership of the two Ministries i.e., Ministry of Jal Shakti and Ministry of Housing and Urban Affairs. The Alliance will focus on three broad themes- Networking, Capacity Building and Technical Support. The Secretariat of the Alliance will be set up at National Institute for Urban Affairs (NIUA), with NMCG’s support.

The Hon’ble Prime Minister in the meeting of the National Ganga Council held at Kanpur in December 2019, had highlighted the need for a new river centric thinking in planning for cities on the banks of rivers. “Cities should be responsible for rejuvenating their rivers. It has to be done not just with a regulatory mindset but also with a developmental and facilitatory outlook” stated the Prime Minister. Subsequently, the National Mission for Clean Ganga (NMCG) and National Institute for Urban Affairs (NIUA) have collaborated together to launch the River Cities Alliance (RCA). 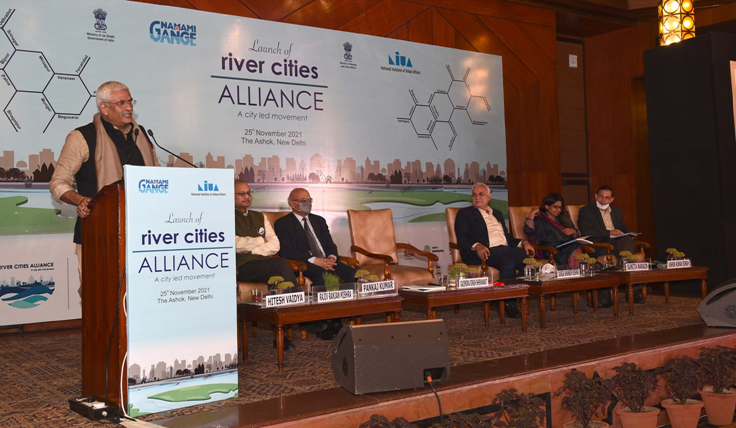 Speaking on the occasion the Union Minister said that this is an excellent initiative which will enable cities to learn from each other’s successes and failures as well as connect people with the rivers. Shri Durga Shankar Mishra, Secretary, Ministry of Housing and Urban Affairs stated, “The River Cities Alliance can play a crucial role in connecting cities with their rivers, and that it can be a model for all cities in the Basin and beyond to emulate”. Shri Pankaj Kumar, Secretary, Ministry of Jal Shakti stated “This Alliance will give an opportunity to municipal administrators and their teams to take path breaking initiatives and learn and inspire each other”. In his address, Shri Rajiv Ranjan Mishra, Director General NMCG said “Although the Alliance began with the Ganga basin cities, it was extended to include cities beyond the basin as well. Thus, the work and knowledge products which will be developed under this Alliance will help cities to learn from each other and be enriched by both national and international experiences”. Shri Hitesh Vaidya, Director, NIUA said that “The River Cities Alliance is a culmination of 3 years of efforts for river sensitive development of our cities.” Ms. Sunita Narain, Director General, Centre for Science and Environment was of the view that the idea of a River City Alliance is critical as rivers are crucial for cities. During the session, Hon’ble Union Minister Shri Gajendra Singh Shekhawat, along with the other dignitaries launched the River Cities Alliance video and also unveiled the Urban River Management Plan for Kanpur City.

The primary objective of RCA is to provide the member cities with a platform to discuss and exchange information on aspects that are vital for sustainable management of urban rivers such as minimizing their water footprint, reducing impacts on river and water bodies, capitalizing on natural, intangible, architectural heritage and associated services and develop self-sufficient, self-sustainable water resources through recycle, reuse strategy. The Alliance cities will work towards adopting and localizing national policies and instruments with key river-related directions, prepare their Urban River Management Plans and develop city-specific sectoral strategies that are required for sustainable urban river management. The Alliance gives opportunities to these cities to strengthen governance aspects for river cities and improves their liveability to attract external economic investments, access state of the art knowledge and frameworks as well as an opportunity to serve as the site for unique demonstration projects which will be implemented by NIUA and NMCG. The 30 member cities include Haridwar, Rishikesh, Kanpur, Ayodhya, Patna, Howrah, Ayodhya, Varanasi, Prayagraj, etc. from Ganga basin states and Aurangabad, Chennai, Hyderabad, Bhubaneshwar, Pune, Udaipur, Vijayawada, etc. from non-Ganga basin states. 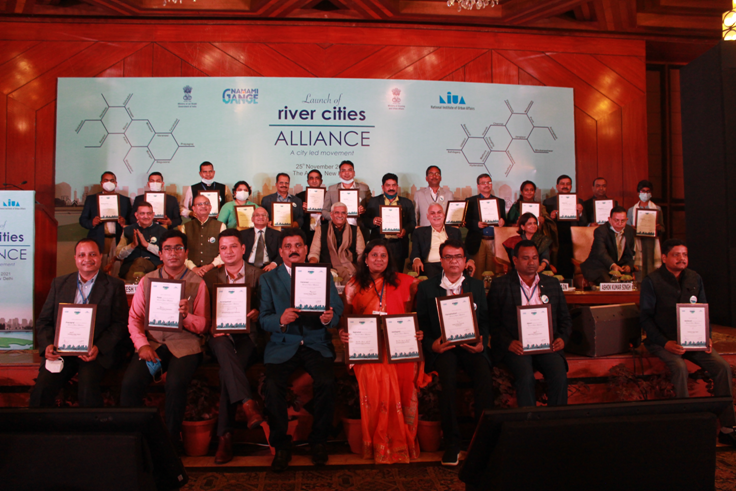 During the day, three sessions were also conducted. In the first session, discussion pertained to ‘Operationalizing the River Cities Alliance’ which included a presentation on Urban River Plan Management of Kanpur, that was followed by a moderated discussion with Commissioners/Executive Officers of the 30 member cities. The second session was a Roundtable Discussion on ‘Holistic Urban River Management’ between Dr. Suresh Rohilla, CSE; Mr. Suresh Babu, WWF; Dr. Madhu Verma, WRI-India; and Mr. Manu Bhatnagar, INTACH. The third session focused on ‘Forging Synergies for the River Cities Alliance’ which comprised of a panel discussion with Ms. Sonia Chand Sandhu, ADB; Ms. Manasi Sachdev, UN-Habitat; Ms. Anitha Sharma, Embassy of Denmark; and Ms. Martina Burkard (GIZ). Ms. Anitha Sharma also shared about the recently signed Strategic Green Partnership between Denmark and India which focuses upon cities and rivers, amongst other key focus areas. With regards to the water sector, the Government of Denmark is working in collaboration with the Ministry of Jal Shakti and Ministry of Housing and Urban Affairs.