The Union Minister for Finance & Corporate Affairs Smt. Nirmala Sitharaman today undertook a day long review of the Customs activities at Nhava Sheva in Raigad district of Maharashtra off the Mumbai coast. 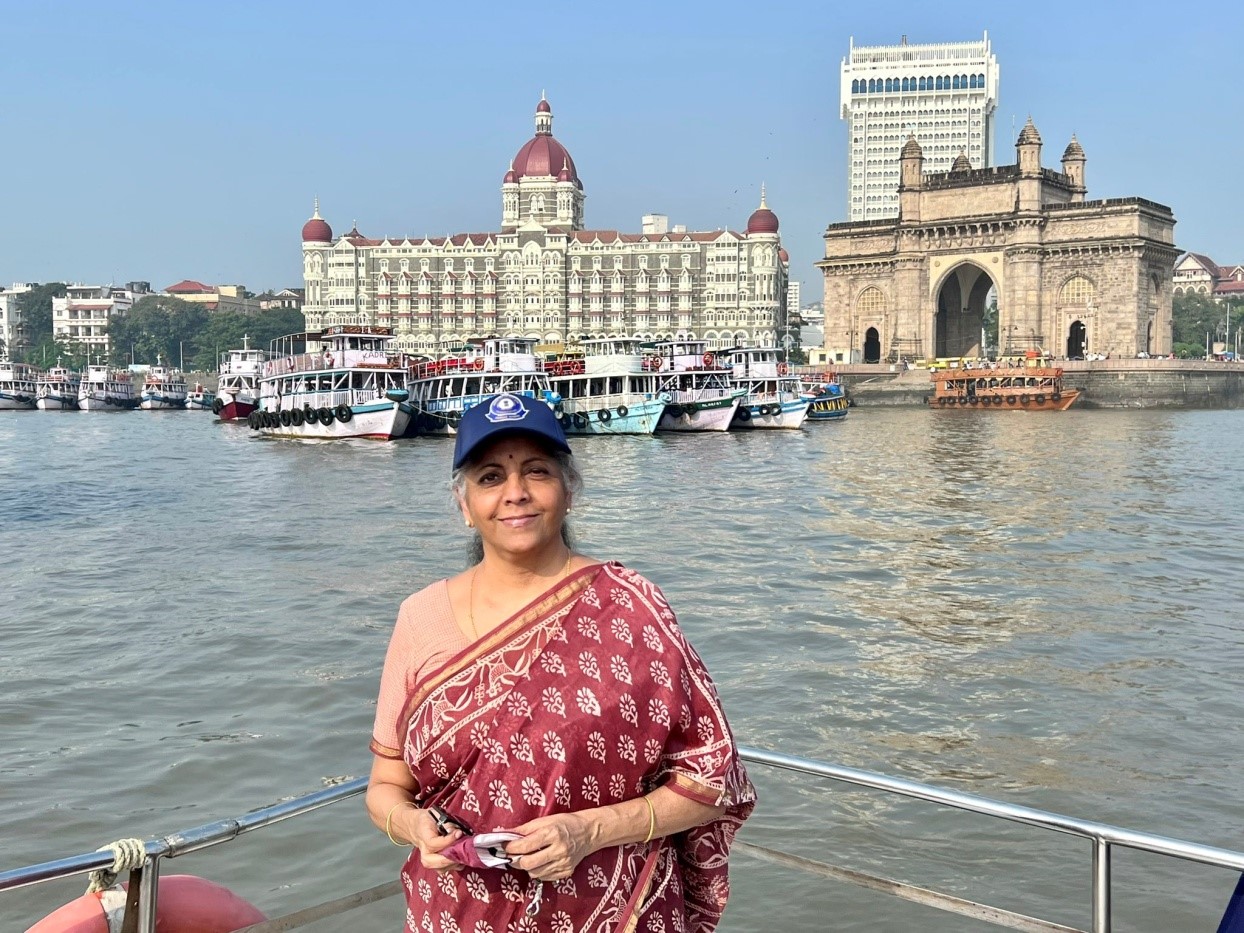 The Finance Minister was given an overview of Customs clearance process and recent initiatives taken by the Customs, for leveraging Information Technology. In the recent past, the CBIC has made significant technological interventions such as online mandatory advance filing of Customs documents on imports, enabling electronic submission of supporting documents on e-Sanchit, online registration of goods along with online payment of Customs duty, digitization of Customs documents and automated clearance on Imports.

To complement these reforms, CBIC has also been actively taking up measures for improvement in the logistics chain such as robust implement X-Ray scanners and use of RFID tags for tracking and tracing of containers. These reforms/initiatives undertaken by CBIC have contributed significantly to enable an environment of Ease of Doing Business, reducing compliance burden and to bring down the overall cargo release time. 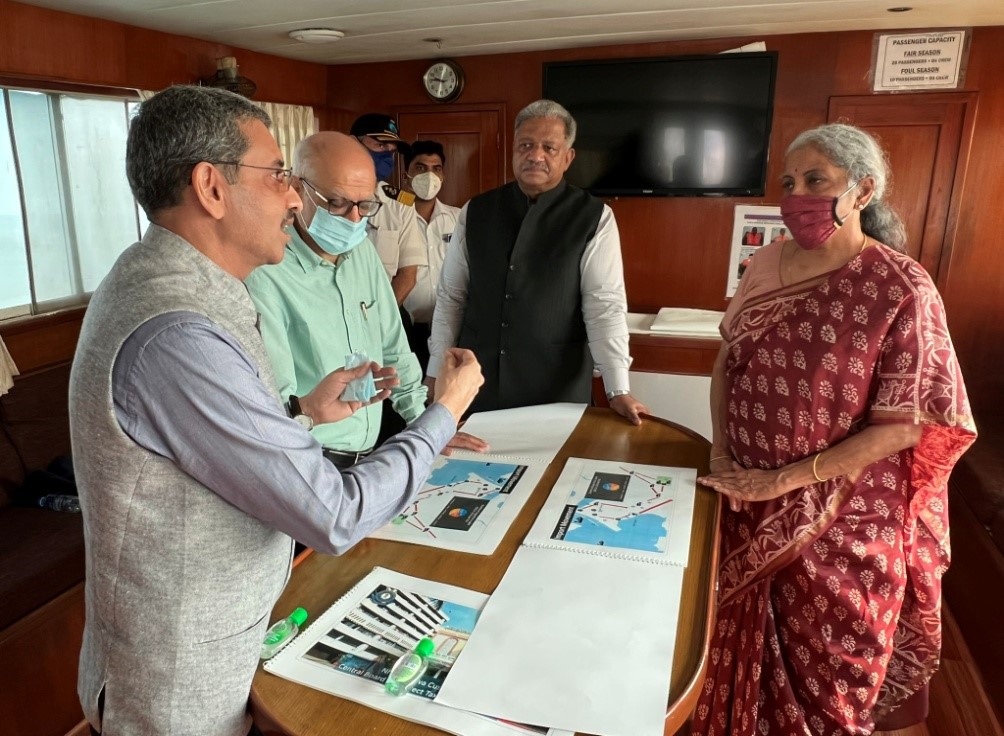 The Finance Minister, after reviewing various initiatives taken by Customs in the area of trade facilitation urged for stronger administration and coordination of functions to achieve ‘zero daily assessment pendency’ and faster release of cargo. She also laid thrust on consistent processing of export incentive schemes viz : RoDTEP (Remission of Duties & Taxes on Export Products) and RoSCTL (Rebate of State & Central Taxes and Levies) and timely disposal of refunds / drawback payable.

Ms. Sitharaman also asked the officers to speed up disposal of hazardous goods and desired that quasi-judicial process, if any, be carried out in a manner to achieve disposal within three months of import. She said adequate publicity should be given for destruction of narcotics.

The Minister also undertook a detailed survey of the infrastructure at Nhava Sheva’s vessel, cargo and land-side stacking and transport operations. She also noted the revenue, security and facilitation roles performed by the Customs officers.

The Minister took special note of initiatives such as the single unified on-wheel export documentation centre (Centralised Parking Plaza) close to the Port for factory e-sealed containers that caters to around 50% export TEUs (Twenty-foot Equivalent Units) at Nhava Sheva. The Centralized Parking Plaza, commissioned a year ago, has integrated the movement, document processing and many services which were handled earlier at multiple sites away from the port.

To further boost trade facilitation, Ms. Sitharaman initiated the setting up of a Customs Examination Facility for on-wheel factory sealed export containers at JNPT’s Centralized Parking Plaza itself. The facility shall obviate the need to move such containers, that are selected for examination on basis of risk, to be sent to a separate location. Both cost and time involved for exporters would be saved. The Bhumi Pujan for this facility was performed by the Finance Minister today. The Minister was also briefed about the Direct Port Delivery (DPD) logistics programme which covers 60% of import TEUs at Nhava Sheva and is an option for the registered importers to take delivery of customs cleared cargo at the Port and thereby save on transportation and other costs.

The Finance Minister was informed that several officers had been trained as licensed operators from the Atomic Energy Regulatory Board (AERB) and three new mobile container scanners have been commissioned inside the port earlier this year. This means that there is no longer a need to move containers on trailers over larger distances. The e-linking of scan report has enabled dispensing with the physical presentation of a paper-based report.

Ms.Sitharaman commended the Customs for bringing their facilitation center under a 24×7 shift system of work so that the risk management system facilitated import cargoes do not have to wait, even during the off-hours, for out of charge processing and asked for replicating this at other locations.

Finance Minister exhorted the officers to constantly meet taxpayers and citizens, especially the youth so as to understand their expectations from the Government. She wanted officers to be proactive in redressing the taxpayers’ grievances in an effective manner and to put in place a mechanism to ensure consistent awareness about changes in Customs procedures. She also urged the officers to come up with suggestions on how technology may be used to further simplify and ease business processes of Customs and for strengthening its efficiency.

Ms.Sitharaman also directed that a nationwide outreach be conducted by the CBIC on the occasion of International Customs Day on 25th January, 2022, to engage with various stakeholders such as the Importers, Exporters and the Custom Brokers etc. This outreach should have a two-fold objective; one to create awareness among the stakeholders about various path breaking reforms being undertaken by the Customs Department for the Ease of Doing Business and second; to elicit feedback from the stakeholders’ community with regard to their expectations and problems with a view to address the same and find quick solutions. 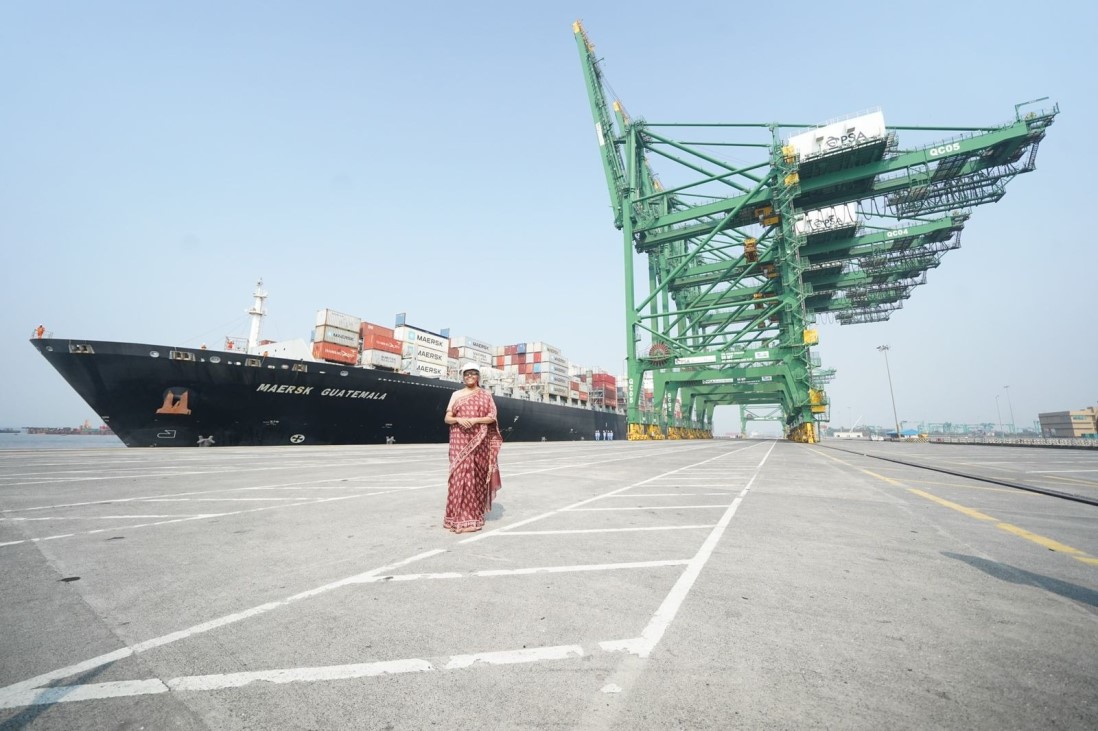 Nhava Sheva, which houses India’s largest container port JNPT, contributes nearly 20% of the nation’s Customs duty revenue. About 85% of the cargo handled is containerized.  The port is capable of handling over 7 million TEUs (Twenty foot Equivalent Unit containers) per year. Traditional Welcome of the Finance Minister at Nhava Sheva 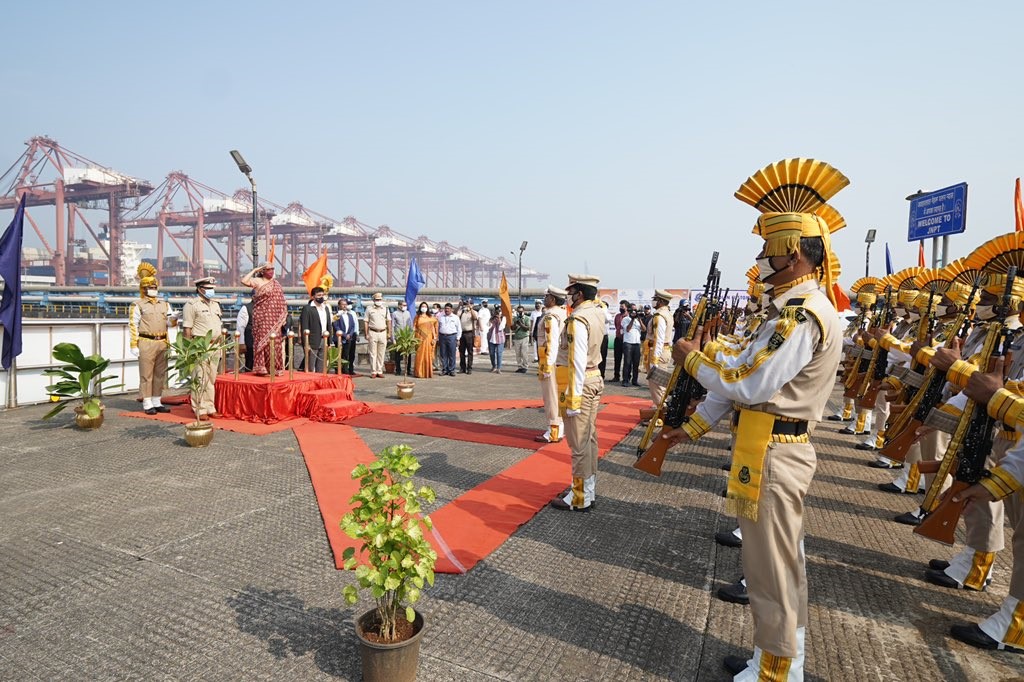 CISF Guard of Honour for the Finance Minister at JNPT Landing Jetty. 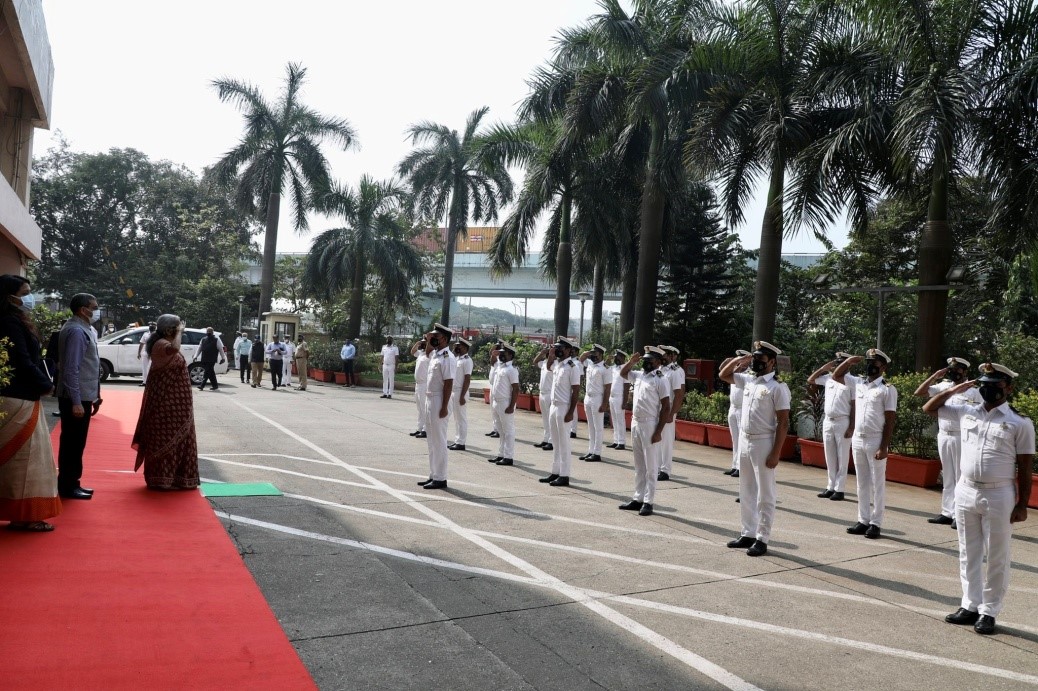