Uttarakhand Tribal Festival is part of celebrations of Azadi Ka Amrit  Mahotsav being celebrated across country and is one of the curtain raiser programmesbeing organized ahead of the week long celebrations of Amrit Mahotsav from 15th-22nd November, 2021. As one of the theme of the AmritMaohtsav is Whole of Government approach and Jan-bhagidaari, the State-Tribal Research Cum-Cultural Centre and Museum (T.R.I.) in collaboration with the Ministry of Tribal Affairs, Government of India has jointly organized the festival to promote and showcase the rich traditions, culture, art, handicrafts and food of the tribes of Uttarakhand namely Jaunsari, Tharu, Boksa, Bhotia and Raji. On the occasion, Sh. Munda, acknowledged the commitment of the Central Government under the leadership of Prime Minister Shri Narendra Modiji for the overall development of the tribal community.  He thanked PM Modi for declaring15th November 2021 as “Janjaati Gaurav Diwas”.

Shri Munda congratulated and appreciated the efforts of the Uttarakhand Government towards the development of tribal communities.   He promised to fulfil the demands of the  Chief Minister of setting up 2 EMRS, a Museum for Freedom Fighters and 5000 tablets for tribal students.  He thanked citizens of Uttarakhand and the Tribal community of Uttarakhand for organizing the festival and participating the event with great enthusiasm.

Shri Munda, on this occasion, paid his tributes to Bhagwan Birsa Munda, who was a freedom fighter and sacrificed his life fighting for “Jal, Jungle and Jameen.” He urged the Uttarakhand Government to send proposal under Article275 and other schemes of Ministry which would go a long way for the empowerment of Tribes under Article 275 of the Indian Constitution.  He congratulated the students and teachers of Eklavya Model Residential School, Kalsi Dehradun on their exceptional performance in the field of Education and for emerging as a role model in quality education. He emphasized the significance of educating the communities regarding the Forest Rights Act and Community Forest Rights and working with TRIFED on increasing the livelihood of the tribal community.

Speaking on the occasion,  Chief Minister of Uttarakhand Shri Pushkar Singh Dhami payed homage to freedom fighter Veer Shaheed Keshri Chand ji and said that Uttarakhand has been a land of freedom fighters. He said the event demonstrated the rich and diverse tribal art & culture. 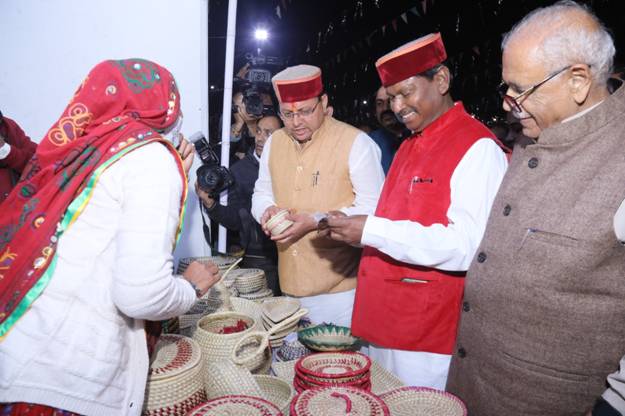