Life of Lakshmi Bai has been inspiring women for generations: Shri Puri Unveiling the Statue, Shri Puri said that in this 21st century there is lot of discussion on the issue of women empowerment and gender equality, but we have forgotten that Indian history is replete with stories of women bravery, sacrifices and achievements and the story of the Rani Lakshmi Bai is one of them. This statue which will go on inspiring the students of this college, he added.

Describing Rani Lakshmi Bai as a major symbol of revolt against the repression of British Raj, the Minister said that her life has been inspiring nationalism and Indian women for generations who led the freedom revolution of  India with utmost bravery, skill and force against British rule. 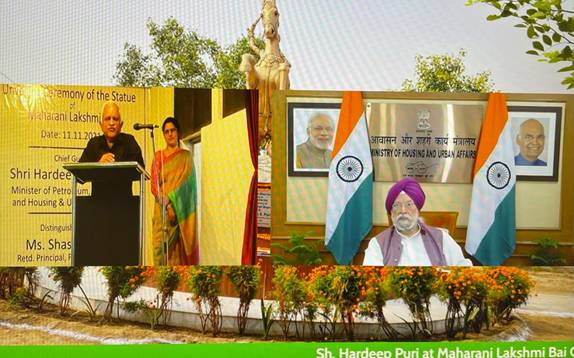 The Minister said that Rani Lakshmi Bai has been depicted only as a freedom revolutionary in films and in stories, but only a few people know that she was an intellectual par excellence who was equally good in English language too.

Shri Hardeep Puri also dedicated the Commerce Block of the college in the name of the great educationist,  teacher and founding father of the college, Shri Ashok Mittal.